O God, who have taken to yourself the blessed Virgin Mary, mother of your incarnate Son: Grant that we, who have been redeemed by his blood, may share with her the glory of your eternal kingdom; through your Son Jesus Christ our Lord, who lives and reigns with you, in the unity of the Holy Spirit, one God, now and for ever. Amen. (Collect for the Feast of St. Mary the Virgin, August 15, 2014)

At the Center of the Heart

God sat upon God’s big, white throne.
God sat staring out the window alone
not seeing the superstrings and quanta, the quarks and the gravitons, not
seeing the gamma rays and x-rays and the dark matter, not
seeing the galaxies and the suns, the stars and the planets, not
hearing the drumbeat of time nor the music of the spheres, not
witnessing the dances of asteroids and meteors and comets, not
appreciating the wonder and the beauty that sprang
forth from God’s word, from God’s Big Bang.

God heard that question arise
from women and men, from girls and boys of
every tribe and language and people and nation;
God heard that question asked
by each of them, in his or her own native language —
Parthians, Medes, Elamites,
and residents of Mesopotamia, Judea and Cappadocia,
Pontus and Asia, Phrygia and Pamphylia,
Egypt and the parts of Libya belonging to Cyrene,
Romans and Jews, Cretans and Arabs,
Angles and Saxons, Inca and Aztecs,
Iroquois and Dutch, Celts and Chinese,
Inuit and Swahili, Vikings and Fijians —
in their own languages God
heard them speaking the question
at the center of the their hearts.

God heard that question arise
from priests and shamans, prophets and philosophers of
every religion and sect and theology and denial;
God heard that question asked
by each of them, out of his or her own terms and conditions —
Law and Obedience, Relationship and Sinfulness,
Light and Shadow, Existence and Meaning,
Disease and Death, Poverty and Wealth,
Suffering and Satisfaction, Sacrifice and Service,
Time and Eternity, Rebirth and Completion,
Intimacy and Loneliness, Despair and Joy,
and even feelings and thoughts and emotions
the asker could not or would not name —
in their own terms and conditions God
heard them speaking the question
at the center of the their hearts.

God rose from God’s big, white throne.
God rose and walked out the door alone,
passing through choirs of
angels and archangels, and
all the company of heaven,
as they lauded and magnified
God’s glorious Name.
God passed out heaven and walked upon the earth;
God walked in gardens at the time of the evening breeze;
God strode among stones of fire and in the midst of flames;
God stirred up seas so that their waves roared;
God marched in the tops of trees and strolled through the grass of the fields;
God sat upon altars,
placed his feet on temples,
stood atop pyramids,
climbed the steps of ziggurats,
rested in secret places,
housed in Holies of Holies,
visited public sanctuaries,
spoke to prophets and priests,
gazed on household shrines,
sat in people’s kitchens and at their dinner tables,
stood in their chambers and at their bedsides,
guested in workrooms and in their parlors; and
heard them speaking the question
at the center of their hearts. 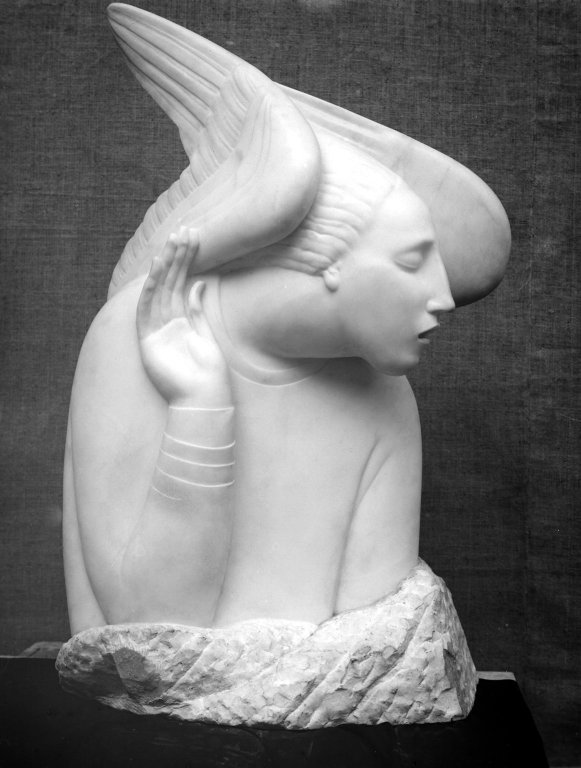 Gabriel stood before God’s big, white throne.
Gabriel stood and trembled, anticipating
a mighty tempest, with peals of thunder, rumblings, flashes of lightning, expecting
a devouring fire, melting wax, refining silver and gold, awaiting
an earthquake, splitting mountains and breaking rocks.
A sound of sheer silence filled the room;
in a still small voice God said:
“Go to a town in Galilee called Nazareth,
to a virgin engaged to a man whose name is Joseph, of the house of David.
The virgin’s name is Mary.”
Gabriel stood and trembled, questioning
at the center of his angel’s heart,
“Why, God? Why this? Why her?”
God sat upon God’s big, white throne,
God sat staring out the window, not quite alone.
“Gabriel,” God said in that deep quiet voice,
“She alone can make the choice; she alone
of all flesh has heard me speaking the question
at the center of my heart.”

Gabriel stood and trembled, greeting
“Hail, thou that art highly favored,
the Lord is with thee:
blessed art thou among women.”
She questioned; he explained.
A sound of sheer silence filled the room;
in a still small voice Mary said:
“Be it unto me according to thy word.”
And Gabriel stood and trembled, sighing,
and relieved, departed,
still, perhaps, unsure of the question
at the center of his angel’s heart.

In the beginning was the Word,
and the Word was with God,
and the Word was God.
The Answer to the question
at the center of the human hearts,
however spoken, however phrased,
or never spoken, never phrased,
was in the beginning with God.
All things came into being through the Answer,
and without the Answer not one thing came into being.
The Answer was in the world,
and the world came into being through the Answer;
yet the world did not know the Answer.
Long ago God spoke to our ancestors
in many and various ways by the prophets,
but in these last days he has spoken to us the Answer,
and the Answer became flesh and lived among us.
The Answer grew and became strong,
increased in wisdom and in years,
and in divine and human favor, but
sometimes wondering, sometimes asking,
“Simon son of Jonah, all of you,
do you love me? Do you place me
at the center of your heart?”
before returning
to the center of God’s heart.

And Mary sat upon her chair crafted by Joseph;
Mary sat staring out the window alone.
Mary, who had birthed the Answer,
from the center of her womb,
treasured all these things,
at the center of her humble heart.

Originally posted at the Episcopal Café’s Speaking to the Soul.