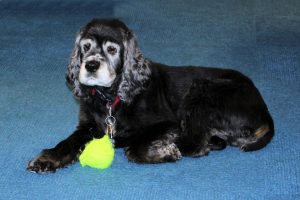 She was known to her friends as “Jo” or “Josie”. She was Josephina Magdalena Ekaterina von Binkerstaff-Wigglesbutt, Countess von Binkerstaff. Jo was a wealthy heiress (the Stilwell Wigglesbutts, you know) who, like Lady Grantham of Downton Abbey, had married into a failing aristocratic family (the Blaues Tel von Binkerstaffs) to prop up their fortunes. Widowed early, she became a patron of arts endowing several museums in her late husband’s memory.

She was also our first cocker spaniel, a stray we adopted while living in Blue Valley, Kansas (hence the “Blaues Tel” part of her story). We still remember Jo with considerable love and refer to her as “the best dog ever.” With Josephine began our tradition of inventing silly aristocratic names and outrageous histories for our canines.

Shortly after we moved to Ohio, we were asked if we might adopt a male cocker named Rascal. His owner was a Marine deployed to Iraq whose parents were unable to keep their son’s dog; he had agreed that Rascal could find a new “forever home” with another family. Josephine’s groomer was also Rascal’s groomer; the two had met in her salon and seemed to get along. So we were asked . . . and we agreed. And Rascal became “Herre Rascal, (exiled) Prins av Halvön,” the outcast scion of a Scandinavian royal family.

We lost Jo to cancer about a year after adopting Rascal and he was our sole canine companion until Fionna came along. (Fionna is the dog in the accompanying picture.) A leggy cocker spaniel rescued from life as a puppy-mill bitch, Fionna (then called “Annie”) was in the custody of Save Ohio Strays, whose president was a co-worker of my wife. “Ready to adopt another dog,” my wife was asked one day at work. “Let’s just take Rascal to meet her,” she said to me later that day. I laughed; if we went to meet her, we would come home with her.

In fact, we didn’t come home with her but only because we were on our way to Ireland for three weeks. We arranged with her foster to leave her there for another month and pick her up when we returned, which we did. We adopted her as “Fionna”, her full name in Funston family tradition being Lady Fionnuaghla nic Bailecraic, Dowager Marchioness of Montville.

Not long after Fionna joined our family, Rascal (who was elderly when we adopted him) died of a stroke and Fi became my constant companion. For ten years she was always at my side. Although she never quite lived up to Josephine’s reputation as “the best dog ever,” she was a faithful dog and her loving company got me through some tough times. When she died of congestive heart failure, my heart broke and I said, “Never again!”

Which, of course, was a lie. No “dog person” ever said that and lived up to it. A year later our groomer asked that fateful question, “Are you ready….?” And I was. Friends of hers were retiring from the dog show life and re-homing their kennel full of cockers. One black male was left.

I drove to Grand Rapids, Michigan, to meet Dudley whose AKC registered name was “Hyer Luv’s Champion Still Totally Smashed.” A five-year-old bundle of energy, he stole my heart. “Sure,” I said, “I’ll take him.” Dudley had to learn how to be a family pet, so I left him with the breeders for two months of re-training, leaving a blanket we’d been sleeping with for a few weeks so he would “learn” our scents. At the end of that time, Evelyn and I both drove to Michigan to retrieve him.

We broke our tradition of giving our dogs titles of nobility with Dudley. He, instead, has been given ecclesiastical rank and is now his Grace, Lord Dudley of Bailecraic, Archbishop Canine of Montville and Prime Dog of All Medina.

So why, this morning, have I felt the need to record all this canine silliness in my Lenten Journal? Well … it’s because I made a comment to a friend’s posting on Facebook yesterday, a comment which was so over the top that (I thought) it was clear that I was being sarcastic. Apparently not! Another commenter took me to task rather rudely and began to debate what I had said. I replied with one word – “sarcasm” – to which came the answer, “Oh, I thought so.”

No, I thought, you didn’t think so. You failed to recognize sarcasm, just as many Facebookers reading the work of The Onion, Andy Borowitz, and NewsThump fail recognize satire.

Later in the day I posted as my status, “I almost can’t say anything now that both satire and sarcasm have died.” It is a thought like one I have had before, when an acquaintance actually lectured me about disrespecting the church and the office of bishop by the way we had humorously named our dog! “I almost can’t say anything now that humor is dead.”

The Jesuit author Hugo Rahner said, “Unmitigated seriousness betokens a lack of virtue because it wholly despises play, which is as necessary for a good human life as rest is.”[1] I think this is the diagnosis of our contemporary situation: we live in a world of “unmitigated seriousness.” Humor, satire, sarcasm, appreciation of irony, lightness of heart, ability to laugh (especially at one’s self) … all these often seem to be missing in personal relationships, in online interactions, in public discourse, and particularly in politics; as a result, society and individuals seem lacking in virtue.

One of my favorite Lenten hymns in the Episcopal Church’s current hymnal is set to a French Christmas carol melody, Quittez, pasteurs. The Lenten lyric was originally written by Percy Dearmer, that champion of English Prayer Book Catholicism and Christian socialism, and subsequently amended by unknown hymn book editors. The second verse is this:

To bow the head
in sackcloth and in ashes,
or rend the soul,
such grief is not Lent’s goal;
but to be led
to where God’s glory flashes,
his beauty to come near,
make clear, make clear,
make clear where truth and light appear.[2]

Too often I have fallen into the trap of “unmitigated seriousness” and in my parish ministry emphasized the sackcloth and ashes of Lent. In today’s world, the church and individual Christians (I think) must have a different Lenten message: we must live and model a life of virtue, characterized by humor and play, by friendship and love, by joy and abundance. And we are to invite others into that life, which (as Oscar Wilde and G.K. Chesterton have reminded us) is much too important to be taken seriously.

So that’s my Lenten thought for today: Lighten up for Lent and invite others to do so, too!

(Note: The photograph is the Dowager Marchioness, the Lady Fionna, with her favorite toy; she absolutely loved tennis balls! This picture was taken not long before her death in 2016.)

[1] Hugo Rahner, Man at Play (Herder & Herder: New York, 1972), page 3 (Rahner actually says this is a quotation from Thomas Aquinas and gives a citation in the latter’s lectures on Aristotle’s Nicomachean Ethics. I am unable find the actual words in Aquinas; one afternoon while in seminary I went down a rabbit hole trying to find them. They are not in the note to Lecture 16 on Book IV that Rahner cites, nor can I find them anywhere else. The sentiment is certainly in concert with the cited lecture, but I don’t believe they are an actual quotation from Aquinas.)