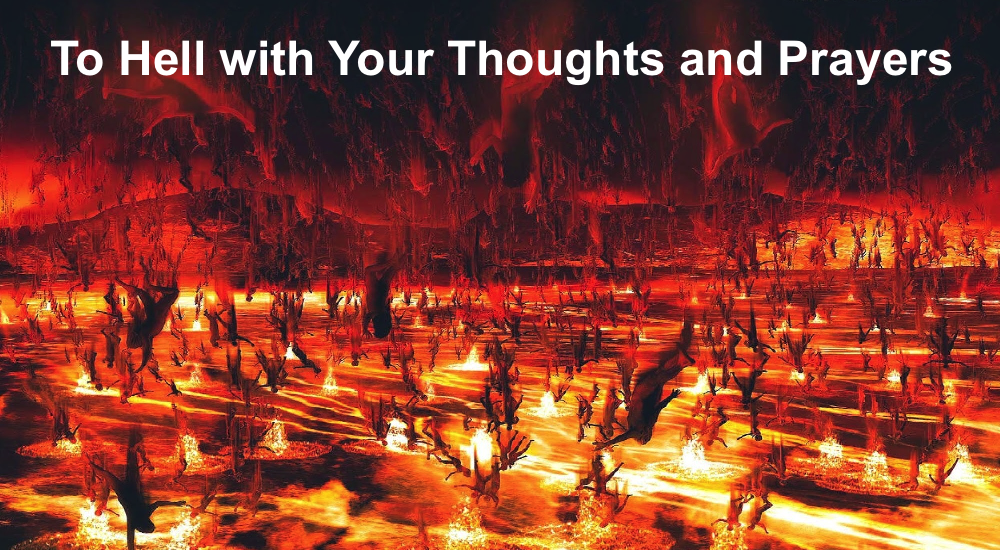 (Note: This essay began as a Facebook post, but I thought I would put it here, too.)

“Thoughts and prayers” are all well and good, but they are not an end in themselves. “Thoughts and prayers” must lead to actions or they are simply meaningless futility. “Show me your faith apart from your works, and I by my works will show you my faith. You believe that God is one; you do well. Even the demons believe—and shudder. . . .[F]aith apart from works is barren . . . [F]aith without works is also dead.” (James 2:18-20,26)

Last night, after our last Ash Wednesday service, I wrote a post in a private clergy FB group. I said that I am not one of those Anglo-Catholic priests who announces his/her mass intentions before beginning the Eucharist, but last evening after the imposition of ashes and the offertory, just before the Sursum Corda, I did so. I announced that I was offering the mass for the (then) 16 (now 17) people (children) murdered in Broward County, FL, and for their families who will now have to remember Valentine’s Day as the day their loved ones were shot to death. And as I did so I broke down and couldn’t for a few moments go on. It occurred to me that we will be (and we are, I see now on the cable news channels) hearing the song of “thoughts and prayers” from our political leaders. And it occurred to me that “thoughts and prayers” are what we do. In fact, “thoughts and prayers” are the stock-in-trade of the church and particularly of the church’s clergy. We don’t really offer the world much else — sure, we feed or house or visit or whatever, but all of that is pretty much an outgrowth of our basic ministry of “thoughts and prayers” … these needless deaths (this is the 12th – or is it the 15th or the 18th – school shooting and the 29th – or maybe the 36th – mass shooting since January 1) and the political chorus of “thoughts and prayers” are devaluing our work, making the very thing we do into a laughing stock rather than a comfort. “Thoughts and prayers” that are not followed by action are worthless and they denigrate the work we clergy do.

My late grandfather, a very active Methodist layman, taught me very early in life: “Never pray for something you aren’t willing to work for.” And the current pope has been quoted as describing the work of prayer in the context of ministry with those living in hunger: “First, you pray for them. Then you feed them. That’s how prayer works.”

I was going to write that “thoughts and prayers” that are not followed by intentional action are “of no consequence,” but that’s not true. “Thoughts and prayers” that are not followed by actions to bring to fruition that which is thought about and that which is prayed for have terrible consequences. Thinking about dinner but not preparing it means someone goes hungry. Thinking about the person who is drowning without jumping in to save them means someone dies. Thinking about putting water on a fire without doing so means the house burns down.

I don’t know the source of the illustration . . . I did a Google image search on the word “hellfire” and it came up. Then I added the white, superimposed caption. If I have violated a copyright, I apologize and if so advised, will immediately take it down.