Binary Thinking? – Sermon for the First Sunday in Lend, RCL Year B, 18 February 2018 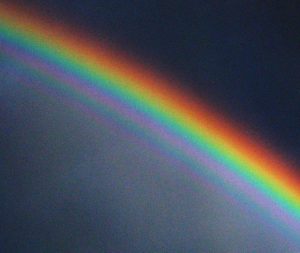 I’m a great fan of Sesame Street. The generation after mine in the Funston family, my niece Saskia, my nephew York, and my own children, Patrick and Caitlin, grew up with that show and it taught them a lot of good things. The show taught my kids literacy, counting, simple logic, and social skills. It did so using a rapid-fire mix of puppetry, animation, and short films. Created in 1969, “it was designed to deliberately mimic the fast pace and style of TV advertising in order to ‘sell’ learning to kids: An Aesop-friendly story featuring the recurring characters on the Street would be intercut with rapid-fire ‘commercials’ for that day’s ‘sponsors’ (‘Sesame Street has been brought to you today by the letters A and S, and the number 7…’).”[1]

Always, it was sponsored by two letters and a number. I thought about starting this sermon that way: “Today’s sermon is brought to you by the letters A and R, and the number 15.” But if I did that, you’d think I was going to, again, preach about guns and mass murder and the killing of children.

In our Old Testament lesson today, the Flood is over, the ark has come to rest, Noah and his family and all the animals have disembarked, and God is speaking to Noah and making some promises. Among the things God says is, “Never again shall all flesh be cut off by the waters of a flood, and never again shall there be a flood to destroy the earth.”[4] God is repenting and, in what theology and the church refer to as “a right beginning of repentance,”[5] God is amending God’s behavior. God has been guilty of “binary thinking” and God is promising to stop thinking in that way.

You know what binary thinking is? It’s the way computers work. A switch is either on or off. In computer code, it is 0 or 1. It is yes or no, like or dislike, love or hate, black or white. Binary thinking feels safe. It creates a world where things are one way or the other. They are happening or not happening. Something is good or it’s bad. A person performs well or doesn’t perform. A deal is in writing or it’s not a deal. Binary thinking ignores subtleties and alternatives; it refuses to see the developmental opportunity of problem solving through exploration, differentiation, and incremental progress.

In a binary world there are start dates and finish times. Things happen in a sequential, linear, and orderly fashion. The human brain loves the idea that this is how the world works. We crave the clarity of this sort of world where things are either/or and there’s a simple solution to every problem.

The most common suggestion I get when confronted by a computer problem is “Shut it off. Turn it back on. That usually solves those problems.” That’s binary thinking. That’s what God did. Creation was fallen; things where breaking down. So he rebooted the system. The Flood was an act of black-or-white binary thinking. God wiped it all out except one little snippet of code: Noah and his family and the animals they could take into the ark; they were OK; that was good stuff to start over with. And then look what happened . . .

Let’s read on in Genesis just a few more verses. Our lesson today ends with verse 17 of Genesis’ ninth chapter: “God said to Noah, ‘This is the sign of the covenant that I have established between me and all flesh that is on the earth.’” And then the chapter continues:

The sons of Noah who went out of the ark were Shem, Ham, and Japheth. Ham was the father of Canaan. These three were the sons of Noah; and from these the whole earth was peopled. Noah, a man of the soil, was the first to plant a vineyard. He drank some of the wine and became drunk, and he lay uncovered in his tent. And Ham, the father of Canaan, saw the nakedness of his father, and told his two brothers outside. Then Shem and Japheth took a garment, laid it on both their shoulders, and walked backward and covered the nakedness of their father; their faces were turned away, and they did not see their father’s nakedness. When Noah awoke from his wine and knew what his youngest son had done to him, he said, “Cursed be Canaan; lowest of slaves shall he be to his brothers.” He also said, “Blessed by the Lord my God be Shem; and let Canaan be his slave. May God make space for Japheth, and let him live in the tents of Shem; and let Canaan be his slave.”[6]

Noah and his family have barely disembarked and already we have drunkenness and sexual immorality and human slavery. And, I’m willing to bet, some of those animals that had just gotten off the ark were probably also hunting, killing, and eating others of the animals. No sooner had God rebooted the system than the code went wrong again.

Binary thinking can’t accommodate that. Binary thinking is defeatist. If the solution isn’t a simple fix, either on or off, yes or no, black or white, then there is no solution at all. This is why after every incident like the tragedy at Stoneman Douglas High School, when someone suggests that maybe we could have better background checks on gun purchases or maybe we could restrict civilian access to military grade hardware, someone else says, “No proposed new gun-control law would have prevented [this]”[7] or “Gun-control laws don’t work, and even if they did, they could never realistically be enforced nationwide”[8] or “Gun control legislation won’t stop mass shootings: ‘We did that once, and it didn’t work’”[9] – which is exactly what Florida Senator Marco Rubio said this week.

God could have said that: “I did that once and it didn’t work; I rebooted the system and it all went bad again.” God could have washed God’s hands of the whole thing, just let it crash, not send the prophets, not send his Son. But God didn’t do that. God repented of binary thinking and so should we, because it’s not either/or. It’s not yes-or-no; it’s not black-or-white; it’s not on-or-off; it’s not Alpha-or-Omega. There are no simple, sequential, linear, orderly answers. Rubio and others are right: no proposed new gun-control law would have prevented the Sandy Hook, or Mother Emmanuel, or Santa Barbara, or Pulse-Miami, or Las Vegas, or Parkland, Florida, massacres. There is no binary solution. But new gun-control laws, new screening requirements, and restrictions on availability of certain weapons or types of ammunition might, just might, make such tragedies incrementally less likely.

So God repented the binary, black-or-white thinking of the Flood, and as a sign of God’s repentance God placed his bow in the heavens. My friend and colleague David Henson posted his sermon for today on his Facebook page. In it he explained the significance of what God did:

Our tradition has tended to understand the rainbow metaphorically, as a celestial sign of God’s covenant not to destroy the world by flood again. We’ve thought of it, more or less, as a seal on a binding contract. But just like so many other ancient stories about rainbows, this one in Genesis isn’t just a symbol or a simple description of a shape of the arc of colors.

Rather it is an actual thing, a weapon in fact. In the Hebrew, the word used here is the same word for the bow of a warrior or a hunter. It’s a word used 75 times in the Old Testament and in every case, it describes the weapon.

How remarkable! At the end of this story, drawn from the violent mythology of the Babylonians, God literally hangs up the divine bow in the sky and does so that it is aimed up toward heaven rather than down toward earth and humanity.

Viewed this way, the Genesis story isn’t a tale about God’s wrath and judgment against humanity’s evil. Rather it is a story about God’s change of heart in the wake of vengeance and violence. The point of the story isn’t the flood itself or the punitive retribution for human sin and evil. That much is unsurprising, drawn from the dominant ideology of the time.

The surprise is, that at the end, God disarms.[10]

And I would add that God does so in a way that illustrates a brilliant alternative to binary defeatism because, in addition to being a weapon now hung in the sky as a symbol of covenant, the bow offers a spectrum of colors in place of the black-or-white of binary thinking.

How many colors are there in a rainbow? When I was in school I was taught that there were seven. That’s the number of colors determined by no less a figure in the history of science than Isaac Newton. Newton named them in his book Opticks[11] published in 1704: red, orange, yellow, green, blue, indigo, and violet. But you know as well as I that the rainbow (despite the picture on the front of our bulletins) isn’t divided into neat bands of color! The colors blend and shade from one to the next with all sorts of variation in between. I read somewhere that one estimate of the actual number of colors is somewhere above 18-decillion (that’s 18 followed by 33 zeros). Any given average human being actually sees about 10-million color and color variations at any one time.

Are you familiar with the word “hexadecimal”? In its purist original meaning it describes a numerical system based on the number 16 instead of the usual base-10 of the decimal system we are most familiar with. This manner of numbering is used in computer programming to choose the colors we see on our computer screens or when we print our digital photographs. This is called the “hex triplet scheme”[12] and it produces 16,777,216 different colors.

Graphically, these millions of colors are represented in what’s called a “color space.” It’s a cube with the blackest black at one corner and the whitest white at the opposite corner, and all the millions of colors spread out between, In this cube of many colors, one cannot move directly from black to white or white to black in one step, as binary thinking would prefer, but one may move from blackest black to whitest white along an almost infinite number of paths exploring incremental changes in the code as one goes . . . and perhaps one finds along the way that one need not go entirely to the opposite end of the spectrum; that one might be better located somewhere else along the continuum.

So we grieve again the deaths of innocents, and we have to admit there is no single, effective, solve-it-right-now answer to gun violence, to mass shootings in our schools and churches and theaters and workplaces. But the good news is that there are alternatives and there are incremental steps to be explored.

And this Good News has been brought to you today by the letters Alpha and Omega, and the number 18-decillion.

This homily was offered by the Rev. Dr. C. Eric Funston on the First Sunday in Lent, February 18, 2018, to the people of St. Paul’s Episcopal Church, Medina, Ohio, where Fr. Funston is rector.