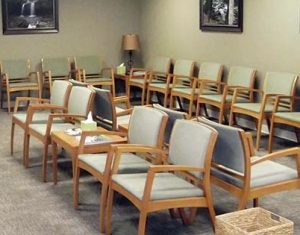 A few months ago I had to take Evelyn to the Emergency Room because of rapid on-set, stress-induced, and disabling inflammatory arthritis; she had awakened about 3 a.m. with severe joint pain a quite literally could not move. We tried to deal with her situation on our own, but it became clear that more was needed. About 4:30 a.m., I called 911 and she was transported to our local community hospital. I dressed as quickly as I could and followed.

I arrived at the ER about 5:30 and waited while a man probably in his late forties checked in an elderly woman. She waited patiently while he dealt with her paperwork. He was much more distraught than she, trying to hurry the process (which only delayed things). Once all was done, he made sure she was comfortable in the waiting room, saying, “Mom, I have to go home and see to the kids. They’ll come get you soon and I’ll be back as quickly as possible.”

“Sandwich generation single-father,” I thought as he hurried out the door.

The attendant at the desk told me that Evelyn was still being processed and settled and, if I would just have a seat, someone would be out to get me as soon as they were done. I sat in the waiting room opposite the old lady and took out my phone to send a message to our kids.

The door opened and in came a family: a mother, a teenage boy who was clearly ill, and a little girl about 4 or 5 years old. “Go wait over there!” said the mother to the girl; she and the boy went to the check-in desk. The little girl skipped over to where the woman and I were waiting.

I know it’s irrelevant, or it should be, but I feel compelled to recall that, like me, the elderly woman was white; the little girl and her family were black. The check-in clerk was also white. As they began their conversation, the black mother’s voice sounded frantic; her volume increased as if she believed doing so was the only way she would get any respect or make herself understood. The clerk’s voice began to sound notes of irritation. I tried to tune them out.

“Hi,” said the child as she plopped down right next to the old lady. “What’s your name?” Children of that age have a different sense of personal space, a different understanding of social propriety. She was oblivious to the drama playing out between her mother, her brother, and the admissions clerk.

“Shalinda,” came the answer. “My brother’s sick. That’s him over there with my mom. He took something he shouldn’t have.”

“So am I, but I think it’s just because I’m old,” the woman replied, patting the child’s knee with her boney, liver-spotted hand, which the child grabbed and held. “So’s my granny,” she said, “She must be at least 50!”

I’d have sworn the woman was 90! “She’s only eight years old than me,” I thought.

“Mr. Funston?” a voice said. I turned to see a nurse standing in the door to the treatment area. “Your wife is ready.”

I smiled at the woman and the child, walked past the mother and her son still haggling with the admissions clerk, and followed the nurse to find my wife.

I hadn’t thought much of that ER waiting room experience until this morning when I was reading the lessons for today’s commemoration of St. Cyril of Jerusalem which (on the website I use) include Psalm 123 and these verses:

I began to contemplate hands and the memory of those entwined hands, the frail hand of the elderly white woman held by and holding the hand of the black child, returned. Those hands curled together, an emblem of unselfconscious mercy and calm in an ER waiting room where so much was going on. Sometimes, we focus too much attention on the family dynamics that lead a man to leave his mother sitting alone in a hospital waiting room, on the social dynamics that bring a teenager into acute care because “he took something,” on our personal situations of stress and pain. We pay too little attention to the hands that reach out to show us mercy. Mostly we just miss them, or we pay them no heed and forget about them until a morning like this. I’m grateful to have remembered those hands today.