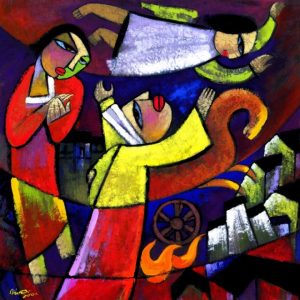 “The Lord your God will raise up for you a prophet like me from among your own people; you shall heed such a prophet.”[1] So said Moses in his farewell address to the Hebrews, to those who were about to enter the Promised Land and begin to become the nation of Israel. As that nation grew and developed it was ruled by tribal leaders and “judges,” by military leaders and priests, by kings (who were occasionally themselves ruled by queens), some of whom were mostly good and others of whom were mostly not-so-good. Throughout all that time, God raised upon not merely “a prophet,” but many prophets: Samuel, Ezekiel, Elijah, Elisha, Isaiah, Jeremiah, Micah, Hosea, Amos, and many, many others.

And there were others who claimed to be prophets but turned out to be either false prophets or prophets of other gods. These were the ones of whom God decreed through Moses, “Any prophet who speaks in the name of other gods, or who presumes to speak in my name a word that I have not commanded the prophet to speak—that prophet shall die.”[2] The Hebrew Scriptures tell us of some of these prophets and their deaths: I think particularly of the 450 prophets of Ba’al who served Queen Jezebel with whom Elijah did battle. When their god failed them the people rose up at Elijah’s bidding and killed them.

Those prophets failed rather spectacularly –– you recall, I’m sure, the story of how Ba’al failed to consume their offering despite their crying aloud and cutting themselves “with swords and lances.”[3] They were easy to identify as false prophets, but how do we identify false prophets in our own day?

For that matter, how do we recognize a genuine prophet when we see one? The people of Capernaum seemed to recognize something in Jesus: “They were astounded at his teaching, for he taught them as one having authority, and not as the scribes.” What was this “authority”? How did they discern it?

In addition to the biblical prophets, the church throughout its history has recognized (eventually) the prophetic voices of others: St. Francis, Hildegarde of Bingen, Martin Luther, John Wesley, Harry Emerson Fosdick, Dietrich Bonhoeffer, Martin Luther King, Jr., Nelson Mandela, Desmond Tutu . . . . We have discerned the voice of prophecy even in those from outside our own Christian tradition: Gautama Buddha, Mohammed, Eli Wiesel, Mahatma Gandhi, the Dalai Lama, young Malala Yousafzai . . . The roles assumed by these recognized prophets vary from age to age: reformer, revolutionary, founder, guardian, instigator, pacifier, comforter, visionary, writer, and spokesperson.

We come to realize that the category and work of “prophet” is almost impossible to define. It cannot be narrowly restricted to the standard definitions of “one who foretells” or “one who tells forth” a divine message, a lone voice crying in the wilderness.

I’m not sure how it is that we discern that these prophets are genuine and others are not, how we perceive that these have authority and those do not, but I have some ideas.

My first thought is that we do so simply by exercising common sense, which perhaps is what the Psalmist encourages when he sings of “good understanding.”[4] When I was doing trial work as a health care and personal injury lawyer one of my partners often referred to what he called “the smell test” in evaluating the testimony of witnesses or claimants. As he explained it, it’s like getting a carton of milk from the refrigerator: you pull it out; you open it up; you take a sniff. If it smells bad, you don’t have to test it, you don’t have to determine anything further. If it smells bad, you just don’t drink it. Sometimes the pronouncements of those claimed to be prophets are like that, they just smell bad.

Another clue, I think, is whether the so-called prophet is too much in conformity with those in political power. We must always remember Lord Acton’s aphorism about the corrupting nature of power. In full, what Lord Acton wrote to his friend Mendell Creighton, then a professor at Cambridge and later the Bishop of London, is this:

I cannot accept your canon that we are to judge Pope and King unlike other men, with a favourable presumption that they did no wrong. If there is any presumption it is the other way against holders of power, increasing as the power increases. Historic responsibility has to make up for the want of legal responsibility. Power tends to corrupt and absolute power corrupts absolutely. Great men are almost always bad men, even when they exercise influence and not authority: still more when you superadd the tendency or the certainty of corruption by authority. There is no worse heresy than that the office sanctifies the holder of it.[5]

A true prophet, I think, cannot align him- or herself with the politically powerful but, rather, must join the Psalmist in recalling the powerful to the works of God which “are faithfulness and justice; all his commandments are sure.”[6]

The prophets of Ba’al whom Elijah defeated were too much aligned with Queen Jezebel; they told her and her husband, Ahab, King of Israel, exactly what they wanted to hear. They in no way challenged the status quo. If, as scripture demonstrates time and time again, the word of God is counter-cultural, the word of prophecy is going to challenge the way things are. As Graeme Sharrock, a Seventh-Day Adventist writer, has put it:

The golden thread that runs through the Judeo-Christian prophets is the concern for justice and mercy — in the home, the community, the nation, and the world. The cry for justice arises, in most cases, from a situation of injustice that must be changed. To achieve this, some prophets attempt to reform the current system by returning to the community’s founding values, and others decry the past and call for something new.[7]

And this suggests a third clue: that the prophet’s message, though it may call for something new, is rooted in the past, founded solidly on the tradition of the faith. The true prophet knows the accuracy of the Psalmist’s declaration that the commandments of God “stand fast for ever and ever, because they are done in truth and equity.”[8]

The congregation in the synagogue in Capernaum recognized in Jesus “a new teaching,” but it was a new teaching “with authority.” In other words, it was fully grounded in the Law and the Prophets, in Torah and the traditions of the Jewish faith. A prophet’s challenge, like Jesus’ teaching, may call for something new, but that something new is always going to be consistent with Scripture and tradition, not an outright rejection or radical departure from it. As one writer has said, “The criterion of true prophecy is what it should be — truth, the correspondence between the prophetic word and the realities of history.”[9] The genuine prophet always does the difficult work of being simultaneously an innovator and a restorer, of keeping the “relation between the old and the new . . . in creative tension.”[10]

In Matthew’s Gospel, Jesus warned his followers, “[F]alse messiahs and false prophets will appear and produce great signs and omens, to lead astray, if possible, even the elect. Take note, I have told you beforehand.”[11] This admonition suggests to me what will be my final idea about judging the validity of a modern prophet: showiness. There are a lot of people today claiming to speak for God with “great signs and omens,” with mega-churches and television ministries, with their own universities, with jet planes and large expensive homes. I admit to having a prejudice against preachers with that kind of flashiness. I am constantly reminded of Paul’s admonition to the young bishop Timothy that a bishop or priest should be “temperate, sensible, respectable . . . and not a lover of money,” that such a leader of God’s people should “manage his own household well,” and that he should not “be puffed up with conceit.”[12] He similarly says of deacons in the church that they “must be serious, not double-tongued, not indulging in much wine, not greedy for money,” and that like bishops and priests they should manage their households prudently.[13]

Now I have to admit that Paul was not talking about prophets, but it seems to me that this test of clergy ought to be equally applicable to anyone who claims to speak for God, especially in light Jesus’ warning about “great signs and omens.”

So there you have it, make of it what you will: some thoughts about discerning prophets, true and false.

In his commentary on this particular lectionary selection, Lutheran seminary professor Matthew Skinner writes about Mark’s Gospel as a whole:

Mark depicts Jesus as the one uniquely authorized, commissioned, or empowered to declare and institute the reign of God. Through Jesus, then, we glimpse characteristics of this reign. It is intrusive, breaking old boundaries that benefited another kind of rule. It is about liberating people from the powers that afflict them and keep all creation – including human bodies and human societies – from flourishing. It is about articulating God’s intentions for the world, defying or reconfiguring some traditions to do so, if need be.[14]

That is what a prophet, a true prophet announces, the reign of God. And I think that he or she does it in a way that makes sense, in a manner that challenges the way things are, in a way that holds old and new in creative tension, and in a way that is not ostentatious or flashy, but rather temperate and prudent.

Almighty God, whose prophets teach in truth and equity: By the guidance of your Holy Spirit, grant that we may have a good understanding, discerning your genuine prophets and heeding their calls to righteousness, that we may do justice, love mercy, and walk humbly in your sight; through Jesus Christ, our Judge and Redeemer, who lives and reigns with you and the same Spirit, one God, now and for ever. Amen.

This is a homily offered by the Rev. Dr. C. Eric Funston on the Fourth Sunday after the Epiphany, January 28, 2018, to the people of St. Paul’s Episcopal Church, Medina, Ohio, where Fr. Funston is rector.

The illustration is Elijah is taken up to Heaven by Chinese artist He Qi. From Art in the Christian Tradition, a project of the Vanderbilt Divinity Library, Nashville, TN.

[7] Graeme Sharrock, How to Recognize a Prophet When You See One, Spectrum, 9 February 2009 (emphasis in original), online (Return to text)