The Work of Christ – Sermon at the Requiem for Elizabeth Scott Bres, January 28, 2018 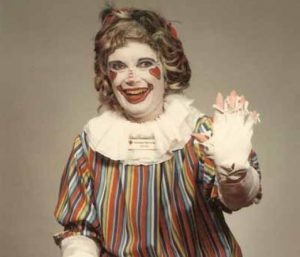 You all know the truth of the statement, “You can’t take it with you.” What you may not know is that that sentiment is straight out of the New Testament! St. Paul, writing to the young new bishop Timothy, says, “We brought nothing into the world – it is certain that we can take nothing out of it.”[1] Once upon a time a man who died was given a dispensation from this truth. Before his death he was given a very special suitcase into which he could put one thing to bring with him to heaven. He gave it a lot of thought and over a period of years, as he led a successful life, he made his final decision and loaded up his suitcase. He put it under his bed waiting for that last day. When he finally died, he showed up at the Pearly Gates carrying his special suitcase with his one important thing. Word spread through heaven and all the angels gathered around him wanting to know what he had brought. So he knelt down and, with great flourish, opened the valise to reveal bright shining bricks of gold. The angels were stunned; they just stood there, staring silently at the man and at his suitcase. Finally, Michael Archangel, the commander of God’s army and spokesman for the angels, in a disappointed and incredulous tone of voice asked, “Pavement? You brought pavement?”

I don’t know if Betty got a special suitcase, but if she did, my guess is that a strong candidate for the one thing she might have put into it was her Pepper the Clown costume. As I’m sure you all know, Betty was a graduate of Clown College and a registered professional clown. As Pepper the Clown, she traveled the world and clowned on six continents, bringing laughter and joy wherever she went. A few years ago when she returned to her home town, The Sewanee, Tennessee, Mountain Messenger said of Betty that children and adults in “Las Vegas, Ohio, Brazil, Australia, Russia, and Korea all bore witness to Pepper’s upbeat, positive attitude and her ability to put a smile on anyone’s face.” Her son Scott remembers her saying, “While we may not understand each other’s native language, everyone speaks Clown.” Scott once said:

As soon as she put on her face and gloves, she was no longer Betty — she was Pepper the Clown. When Betty was Pepper the Clown, she was very happy and she tried to make everyone else happy too. The only thing that mattered was that she could bring joy and make people smile, if only for a moment, no matter where she was or what their circumstances.[2]

As such, Betty was an inheritor of the great tradition of Joseph Grimaldi, the early 19th Century English-Italian pantomime harlequin who is considered the father of modern clowning. It was Grimaldi who introduced the use of brightly colored oversized clothing and the individualized painted faces which are the trademark of today’s clowns.

Every year on the anniversary of Grimaldi’s death in May there is a special memorial service held at Holy Trinity Church in the Dalston district of London near where he is buried. Hundreds, even thousands, of clowns from all over the world attend the service in their costumes and make-up. The church is now the home of the Clowns International Gallery and Museum.[3]

The vicar of Holy Trinity is considered the chaplain to the international clowning community. In 1959, that was the Rev. Stanley Evans who said at that year’s service “that every time a clown’s laughter penetrated a child’s heart and brought happiness, the work that clown was doing was the work of Christ.” [4]

A later chaplain to the clowns, the Rev. Roly Bain, who is himself a clown whose costume includes an oversized clerical collar, in his 2010 sermon at the Grimaldi memorial said:

There is a huge religious dimension to clowning – clowns are deeply religious and mystical, and every age, every culture has had its clowns, the wise ones, the messenger between man and the gods. . . . . [T]here is something very powerful about clowns, the best ones anyway.”[5]

That was certainly true of Betty “Pepper” Bres. Throughout her life she did the powerful work of Christ. Until age and illness prevented her from attending church here at St. Paul’s Parish, one thing you could count on on Sunday morning was being greeted with a big hug from Betty. The famous clown-doctor, Patch Adams, once said:

Clowning is a trick to get love close. I can hug 99 percent of people in the first second of contact if I’m in my clown character. The clown assumes your humanity. It assumes that, whatever trauma you’ve had, you can still love yourself.[6]

Betty just seemed to love everybody and encouraged everyone to love themselves.

Surely, as our reading from Isaiah said, the spirit of the Lord God was upon her; she brought the Good News to those who were brokenhearted, comfort to those who mourned, gladness to the faint of spirit. It makes sense, then, that Jesus, who began his public ministry by quoting those same words from Isaiah, has been portrayed often as a clown or “holy fool” as, for example, in the 1964 movie Parable or in the musical Godspell. Scottish pastor and theologian Olive Fleming Drane points out that Jesus

regularly used techniques that are typical of serious clowning, poking fun at people who took themselves too seriously and wondering what the world might be like if things were different, if the rules worked some other way. And so the first become last, the blind lead the blind, and a yoke turns into a symbol of freedom – not to mention people with planks in their eyes and camels squeezing through the eyes of needles.[7]

“This is,” she says, “classic clowning.” It’s no wonder then that we can say that Betty Bres, Pepper the Clown, did “the work of Christ.”

In her later years, Betty became convinced that she was going to go home to Tennessee, back to Sewanee and to Otey Parish Episcopal Church, which I think must truly have been her spiritual home. Each Sunday morning she would tell me that she was going back there the next week. Whenever Betty would talk of Sewanee, I was reminded of a story about a Greek Cypriot who loved the island of Cypress nearly as much as Betty loved Sewanee. When this man died he grabbed hold of a handful of the soil of Cypress and when he arrived at the gates of heaven he was still holding on to that fistful of dirt. St. Peter told him he would have to leave it behind, that he couldn’t bring that dirt in with him, but the man couldn’t do that; he just couldn’t let go. So he sat down on a bench outside the Pearly Gates. Over time, his friends passed on and as they came to the gates the saw him sitting there. When they found out why, they would try to convince him to drop the dirt and enter, but he wouldn’t. Eventually, his beloved wife died and arrived to find him sitting there. She had no better luck convincing him to let go of that handful of Cypriot soil, so she went in without him. After a time, though, she came back out and bargained with St. Peter. Could her husband leave the soil at the bench and just go inside to look around? If after doing that he still had to have the dirt, he’d come back out and stay on the bench forever. Peter consulted the Powers-That-Be and was given permission to allow this slight variation on the rules. So the man carefully deposited his Cypriot soil where he could come back for it and, taking his wife’s hand, walked through the gates. And there . . . on the other side of the gates of heaven . . . he found the whole island of Cyprus in all the beauty he remembered made gloriously new. He never went back for the dirt.

Of course, none of us really knows what heaven will be like. Jesus said, “In my Father’s house there are many dwelling places,”[8] and in John’s vision of the new Jerusalem he heard a voice saying: “The home of God is among mortals. He will dwell with them as their God; they will be his peoples, and God himself will be with them; he will wipe every tear from their eyes.”[9] Wherever we have felt closest to God, wherever we have been happiest or most joyful, wherever in our mind’s-eye we picture when we think of heaven, as Betty surely pictured Sewanee, I suspect that will be what heaven is like for each of us, as it was for the Cypriot man in the story. I like to think of Betty finding her beloved Sewanee on the other side of those gates in all the beauty she remembered made gloriously new.

Writing to the Corinthians about what comes after death, St. Paul said, “We know that if the earthly tent we live in is destroyed, we have a building from God, a house not made with hands, eternal in the heavens.”[10] Heaven, of course, is not made with human hands, but I think perhaps we build heaven from our memories. We are, as the Southern poet R. Lee Sharpe wrote in the 1890s in his verse entitled A Bag of Tools, “builders of eternity:”

Isn’t it strange
That princes and kings,
And clowns that caper
In sawdust rings,
And common people
Like you and me
Are builders for eternity?
Each is given a bag of tools,
A shapeless mass,
A book of rules;
And each must make –
Ere life is flown-
A stumbling block
Or a steppingstone.[11]

Arthur V. Pedlar, a retired clown attending one of those Holy Trinity Church Grimaldi memorial services, commented on Sharpe’s verse saying, “I like to think that the clowns build stepping stones.”[12] Betty certainly built many stepping stones, a pathway that is still with us.

We seem to give her back to you, dear God, who gave her to us. Yet, as you did not lose her in giving, so we have not lost her by her return. Not as the world gives, do you give, O Lover of souls! What you gave, you take not away. For what is yours is ours always if we are yours. And life is eternal; and love is immortal; and death is only a horizon; and a horizon is nothing save the limit of our sight. Lift us up, strong Son of God, that we may see further; cleanse our eyes that we may see more clearly; draw us closer to yourself, that we may know ourselves nearer to our beloved who are with you. And while your Son prepares a place for us, prepare us for that happy place, that, where they are and you are, we too may be; through the same Jesus Christ our Lord. Amen.

This is a homily offered by the Rev. Dr. C. Eric Funston at a Requiem Mass for Elizabeth Scott Bres held on January 28, 2018, to the people of St. Paul’s Episcopal Church, Medina, Ohio, where Fr. Funston is rector.

The illustration is Betty in her Pepper the Clown costume and make-up.