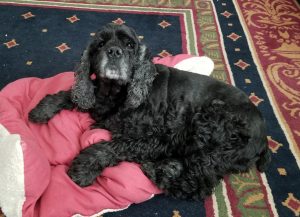 I have put off writing my journal for the Fourth Sunday in Lent because it was “one of those days.”

I was awakened when the dog yelped in pain, really cried out, and we’re not at all sure why. It may have been that my wife in the early morning darkness stepped on his paw, though probably not. When I examined him, it seemed that his pain could be either (a) sensitive ears – he is prone to ear infections; or (b) a sensitive jaw or teeth; or (c) his neck.

He went for a walk with me, doing his business and not really showing any signs of distress. When we came back in, however, he was “clingy,” staying right with me and not leaving my side. He was also not his usual chipper self. We waited for a few hours to see if he would improve and, when he did not, took him to the emergency veterinary hospital.

As usual (we’ve been there before) it was a long wait and we were witness to very sad animal emergencies, including two euthanasia situations. It was heartbreaking! Eventually, though, the vet saw us and diagnosed probable degenerative arthritis and possible cervical disc disease. Apparently the onset of symptoms in small dogs can be quite rapid. He was prescribed an anti-inflammatory and some painkiller and sent home with an order to see his own vet for recheck in two weeks. We are to let him get lots of rest, prevent jumping, and use a harness rather than a collar when walking him.

Shortly after 5:00 p.m. I remarked to my wife that when one spends so much of the day at the emergency hospital, the day goes very quickly. A little while later it occurred to me that spending most of the morning and early afternoon there was not all that much different from spending the morning and the early afternoon at church, at least in so far as the way it eats up one’s Sunday.

And then it occurred to me that the two are similar in other ways, as well. It is St. Augustine of Hippo who is supposed to have said, “The church is not a hotel for saints, it is a hospital for sinners.” Issues of life and death, joy and grief, love and loss play out in the waiting rooms and examination rooms of the veterinary hospital every bit as much as they do in the sanctuaries and meeting rooms of our churches. Perhaps they do to a greater extent; I have had conversations with other clients in waiting rooms where I learned more about them and their spiritual lives than I ever did in conversations at coffee hour, and with people who had no idea I was a priest. I can only imagine conversations they may have had with the vet!

Why can’t our churches be more like that? Why have we made them into those hotels for saints that Augustine decried or, worse, into museums for saints as Abigail van Buren is alleged to have described churches? Clergy need to be less concierges and more like veterinarians.

Indeed, a colleague today in online conversation commented that he once suggested to a bishop who often referred to clergy as “physicians of the soul” that a better term would be “veterinarians of the soul” because, like vets, our patients are unable to tell us what is wrong.

A spot-on observation, I think. The clergy task is at least two fold in this regard: (a) to teach people how to speak of what is wrong and (b) to help people heal from what is wrong even when they cannot speak of it.