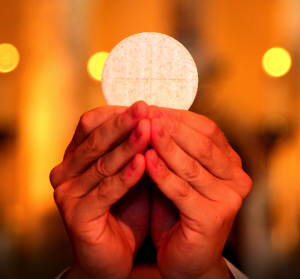 “… rendering unto thee most hearty thanks for the innumerable benefits procured unto us by the same.”[1]

A few days ago, a fellow priest complained about the difficulty of saying these words from the “traditional language” service of Holy Communion in the Episcopal Church’s Book of Common Prayer, especially early in the morning (which is about the only time they are said in most parishes anymore, if they are said at all). I responded with the snarky remark that if my colleague had grown up with them, rather than being a “convert” from another Christian tradition (as he is), they would not be difficult at all.

I did not grow up with them myself, but I did hear them at least three times each week during the academic terms of my high school years. A non-Episcopalian, I was enrolled in an Episcopal Church affiliated boarding school more than a thousand miles from home. Like all the students of that school, I was required to attend chapel which most days followed the liturgy of one of the Daily Offices but twice each week was a celebration of the Eucharist. Then on Sundays, unless one was attending church off campus, there was another mandatory service of Holy Communion.

In those days, the 1928 Prayer Book was in use and unlike the Episcopal Church’s current liturgical text with its many options there was one and only one service for the Eucharist. As a result, those difficult to say words of the Eucharistic prayer became very familiar. So familiar, in fact, that they turned me into an Episcopalian. After two years of immersion in the language and practice of Anglican worship, I was baptized and confirmed in the Episcopal Church and, except for a couple brief periods of disaffection, I have been here ever since.

Those old, quasi-Jacobean formulas still rattle around my head and I can recite them nearly verbatim even though I have not celebrated or even participated in such a service for nearly 20 years. As I move into retirement ministry as a “supply priest” filling in for vacationing or otherwise absent clergy, I suspect I will be seeing more of that form of service than I have in decades.

“And here we offer and present unto thee, O Lord, our selves, our souls and bodies, to be a reasonable, holy, and living sacrifice unto thee….”[2] There is something intensely satisfying about that language. In all honesty, there is nothing remotely like this self oblation in any of the four contemporary English Eucharistic canons, although two of them do speak of joining Christ in his sacrifice. Why have we stepped away, at least liturgically, from this complete commitment of ourselves to God? And if we cannot bring ourselves to do it within the safe and comfortable confines of the drama of the Mass, how do we find the strength and courage to do it in the chaotic and dangerous milieu of the everyday world around us?

Perhaps we have stopped doing so in the liturgy because we’ve stopped mentioning those “innumerable benefits!” It is only because of those that we have the fortitude to be “living sacrifices!” It’s too hard to say anything about the benefits, but failing to do so, has it become too difficult to make the sacrifices?

I never thought I would ever say this … but I do believe that I may actually be looking forward to saying a Rite I Mass! “All honor and glory be unto thee, O Father Almighty, world without end. AMEN.”[3]