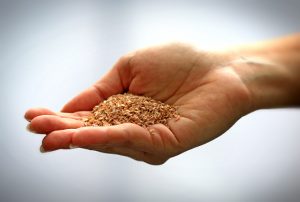 The theme for today’s lessons is clear . . . we are almost “hit upside head” with the concept of Sabbath. Our reading from Deuteronomy is the law establishing the mandatory day of rest:

Our Gospel lesson relates two of Mark’s stories of Jesus’ conflict with the Pharisees about Sabbath observance: first, a probably made-up tale about the disciples plucking wheat,[2] and second, a probably true story about Jesus healing a man with a crippled hand in the context of a synagogue Sabbath observance.[3]

So what is Sabbath?

In a nutshell, it is a day of rest; that is the very literal meaning of the Hebrew word shabbat from which our word Sabbath is derived. It is, traditionally, the seventh day of the week in honor of the biblical story of creation:

The Torah decreed that humankind, created in God’s image, should do as God had done and rest on the seventh day. But that opened up a whole new question: What does it mean to rest? What can one do? What ought one not to do? This debate was in full swing at around the time of Jesus and the writing of the Gospels. This was the time during which something which has come to be called “the oral Torah” was being created.

Teachers called “rabbis” (you’ll remember that Jesus was addressed as “rabbi”) were coming to be regarded as important religious figures within Judaism. Rabbi is not a titled found in the Hebrew Bible. So far as historians can tell, the term was first used for Rabbi Gamaliel the Elder who is named in the Christian Book of Acts as a leader of the Jewish council called the Sanhedrin and as a teacher of the young man who eventually became the Apostle Paul. The title also is found in the Gospels of Matthew, Mark, and John where it is used to refer to the scribes and the Pharisees, as well as to Jesus. These rabbis were compiling the “oral Torah” which in the early Second Century of the Christian era would be transcribed in a commentary on the Law known as the Mishnah.

This is a hint for us to the attitude of the Pharisees with whom Jesus is seen debating the Sabbath in the stories from Mark’s Gospel reading today. This sort of legalistic approach to the “day of rest” had transformed it from a day of rest and relaxation into a day bound up in rules and regulations. The disciples walked through the fields possibly creating a path: forbidden! They plucked grains of wheat as they did so: forbidden! They carried those grains of wheat, maybe from the private to the public domain or vice versa: forbidden! Simply living one’s life is forbidden it seems. This is why Jesus has to remind the Pharisees that “the Sabbath was made for humankind, and not humankind for the Sabbath.”[8] The Sabbath is meant to refresh, not to burden.

Christianity, of course, has long abandoned the seventh-day Sabbath. Sunday, the day of the Lord’s Resurrection, has become the “Christian Sabbath.” The issues, though, of what is appropriate to a day which is to be spent honoring the Lord apart from our usual occupations continue, and we Christians can be as Pharisaical as any First or Second Century rabbi!

Many of us remember the so-called “blue laws” when the power of the state enforced religious observance. You couldn’t buy or be served alcoholic beverages; you couldn’t see a movie; you couldn’t use a public swimming pool . . . there were a lot of things you couldn’t do. The first “blue laws” enacted in North America, I believe, were passed in Connecticut. An Anglican priest named Samuel Peters satirized them in 1781. According to Peters, they provided (among other things)

I don’t know whether the Connecticut laws were as strict as the Rev. Mr. Peters portrayed them, but a hundred or so years later such laws were pretty commonplace. For example, consider this public poster of “Sunday Laws” in force in the Canadian Province of Ontario in 1911: 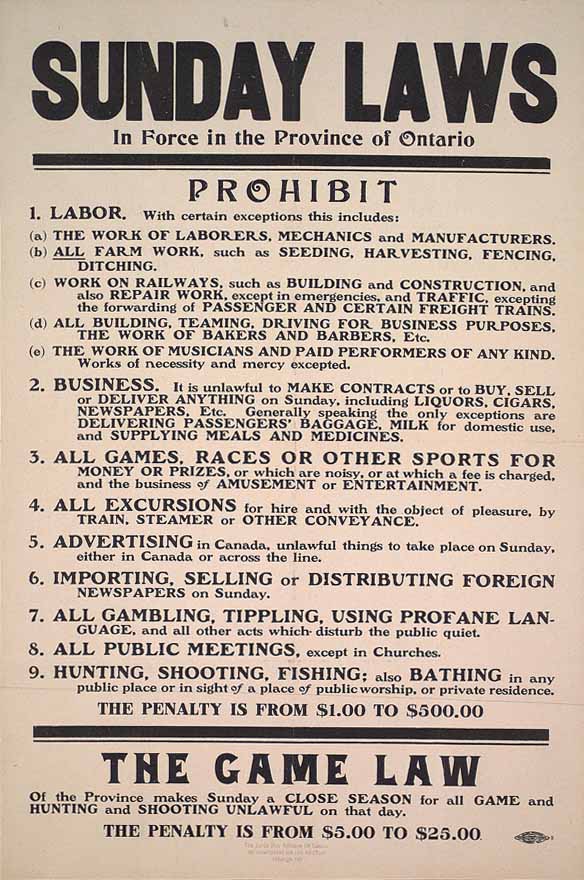 Those laws are all history now, which leaves us with the Bible’s injunction to keep Sabbath and only our own consciences to enforce it.

I have spoken before of my Methodist grandparents with whom I lived for three or four months out of the year for five years from age five until I was ten. Their idea of keeping the Christian Sabbath came from a book my grandfather used in his Sunday School teaching, Golden Counsels by Dwight Moody of the Moody Bible Institute. In an essay entitled How Shall We Spend the Sabbath? Mr. Moody, of course, encouraged church attendance, bible study, and prayer, but then added

If your circumstances permit, engage in some definite Christian work, — such as teaching in Sunday school, or visiting the sick. Do all the good you can. Sin keeps no Sabbath, and no more should good deeds. There is plenty of opportunity in this fallen world to perform works of mercy and of religion.[10]

My grandparents took this to heart: it’s very much in keeping with Jesus angry question to those in the synagogue in today’s Gospel, “Is it lawful to do good or to do harm on the sabbath, to save life or to kill?”[11] Of course it’s lawful to do good, and my grandfather turned it from something permitted into something required. He was a good man, but he was something of a Pharisee.

After church on Sundays, we would have our Sunday dinner and then visit one or more fellow members of Grace Methodist Church who might be ill or elderly and unable to have attended services that morning. My grandparents would take my cousins Robert and Randy and me with them. We had to be on our best behavior, of course, and while my grandparents talked with these folks about what had happened at church that morning, including my grandfather’s often lengthy commentary on the sermon, we three boys were expected to do chores for our hosts. We were asked to sweep the kitchen, take out the trash, mow the lawn . . . and all in our “Sunday best” and we’d better not get our clothes dirty while doing so. It’s a good thing to visit the shut-in and to do chores to help them, but when it’s made a requirement? Well . . . as you might imagine, it rather soured me on Sunday visits and Sabbath-keeping for a good many years!

Well, first off, I don’t think Sabbath has to be taken on a particular day and in a specific way. I’m not suggesting we do away with our regular Sunday worship, but I do think that Sabbath time can be found, can be made on any day and at any time. Christian writer Dorothy Bass says, “Sabbath keeping is not about taking a day off, but about being recalled to our knowledge of, and gratitude for, God’s activity in creating the world, giving liberty to captives, and overcoming the powers of death.”[12]

What Sabbath looks like is going to be different for each of us. Whatever the activity we do or don’t engage in, it’s about taking time to be recalled into God’s presence. Sabbath might mean finding time on a regular basis for silent prayer. It might mean taking regular walks, going to a park or a nature preserve, giving thanks for the gift of the earth. It might mean setting aside a regular time each week or each day for gardening, or painting, or writing poetry. For those who are older, it might be about reflecting deeply on and then sharing orally or in writing the stories of our families so that they are preserved for later generations; for those who are younger, it might mean taking time to hear those stories, to really listen to them. Whatever it is, Sabbath is about treasuring in our hearts the gifts we have been given by God. It is to rest from our worries and everyday concerns, to recall our gratitude for the gifts and the presence God.

Whatever it may look like for you, claim time, take time, make time for Sabbath. Give liberty to your inner captive. Overcome the powers of death in your own life. Rest in the knowledge of, and in gratitude for, God.

This homily was offered by the Rev. Dr. C. Eric Funston on the Second Sunday after Pentecost, June 3, 2018, to the people of St. Paul’s Episcopal Church, Medina, Ohio, where Fr. Funston is rector.