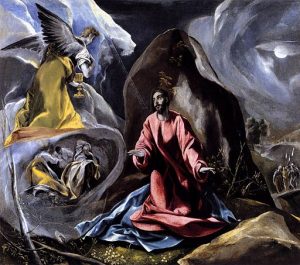 Across the Kidron valley from Jerusalem, at the foot of the Mount of Olives, is a small grove of olive trees. In the midst of it is a church called “The Church of All Nations” and in the center of that church, surrounded by a low wrought iron fence sculpted to resemble brambles and thorns, is a large, rough, flat rock. It is called “the stone of agony” and tradition tells us it is the place where Jesus prayed on the night before he died.

Our gospel lesson for this evening, for Maundy Thursday, does not mention that olive grove, that stone, or Jesus’ prayers. Our gospel lesson on this day is always the same from year to year. We rehearse John’s story of Jesus washing his disciples’ feet. John’s Jesus is self-assured and in control. He “knew that his hour had come to depart from this world and go to the Father.”[1] He knew “that the Father had given all things into his hands.”[2] “He knew who was to betray him.”[3] He gives his friends a “new commandment” (which, as a colleague of mine noted in our on-line bible study, isn’t really all that new): “Love one another.”[4]

If we continue to read in John’s gospel beyond what we just heard, Jesus launches into what is called his “high priestly prayer.” It goes on for four chapters! In it are many familiar passages that we are used to hearing in other contexts and many not realize come from his conversation at the Last Supper:

At the end of the long, high priestly prayer, Jesus “went out with his disciples across the Kidron valley to a place where there was a garden, which he and his disciples entered,” and they are immediately accosted by Judas and a detachment of soldiers.[12] Jesus, John tells us, takes charge of the situation because he knows “all that was to happen to him.” John’s Jesus has no doubts, no second thoughts; John tells us of no agonized prayers at that stone in the olive grove.

But . . . Mark and Matthew do. They tell us that while Jesus and his friends were in that garden across the Kidron valley, before Judas and the soldiers came, Jesus . . .

. . . said to his disciples, “Sit here while I pray.” He took with him Peter and James and John, and began to be distressed and agitated. And he said to them, “I am deeply grieved, even to death; remain here, and keep awake.” And going a little farther, he threw himself on the ground and prayed that, if it were possible, the hour might pass from him. He said, “Abba, Father, for you all things are possible; remove this cup from me; yet, not what I want, but what you want.” He came and found them sleeping; and he said to Peter, “Simon, are you asleep? Could you not keep awake one hour? Keep awake and pray that you may not come into the time of trial; the spirit indeed is willing, but the flesh is weak.” And again he went away and prayed, saying the same words.[13]

Do you suppose that all during dinner Jesus was harboring those same “Please, no!” thoughts he expressed afterward at Gethsemane? Is it possible that while he was washing his disciples’ feet there might have been a “small voice” in the back of his mind saying, “O God, I hope this turns out differently than I expect”? Could an unspoken petition of his high priestly prayer have been, “Please, God, don’t make me do this”?

I have to admit that as the years progress, I find myself struggling with the traditional image of Jesus going willingly to a death he knows is going to happen. The Letter to the Hebrews assures us that Jesus was “like his brothers and sisters in every respect,”[14]that in him “we do not have a high priest who is unable to sympathize with our weaknesses, but we have one who in every respect has been tested as we are, yet without sin.”[15] If that is true, and I do believe it is, then I have to question, perhaps not wholly reject but question, John’s portrayal of Jesus as strong and self-assured, in-charge and free of doubt, confident and fearless.

A few days ago, the New York Times published an op-ed piece by a professor of English literature at Barnard College of Columbia University, a transgender woman named Jenny Boylan, that really resonated with me. She wrote about having rejected the Lutheran faith of her childhood, but then as an adult being strangely attracted into a neighborhood church, “pulled [she said] into [the] church, where I looked around suspiciously, and thought, ‘Please, God, don’t make me do it.'” She wrote:

I thought that doubt (also known as “common sense”) was my roadblock to a spiritual life. Now, these many years later, I have come to believe that doubt is, in fact, the drive wheel of faith, not its obstacle.

In a painting of Christ’s agony in the Garden of Gethsemane, a painting she remembered from her childhood and saw again in that church, she saw “a portrait of a man thinking, ‘Please God, don’t make me do it.’ And yet he did it anyway, in spite of his doubt.” In that recognition, in that moment of seeing Jesus “like his brothers and sisters in every respect,” that moment of seeing Jesus like her, Professor Boylan rediscovered the faith she had left behind.

The Church of All Nations, which houses Christ’s “stone of agony”, is named that because the funds for its construction were contributed by people from all around the world. I think it is well named, because I believe all people from every nation, from every creed have experienced a night at each one’s own “stone of agony.” We’ve all faced doing things which we have to do but would rather not. We’ve all had to live up to commitments we wish we hadn’t made. We’ve all had to do things that, in order to be true to ourselves and our beliefs, we couldn’t avoid. We’ve all had to move, probably many times over the course of a lifetime, into a frightening future despite uncertainties, reservations, and doubts.

At the end of her New York Times essay, Professor Boylan wrote, “Listen: I do not know if an actual person named Jesus rose from the dead. I hope that this is true, but I don’t know. I wasn’t there.”[16] That’s the truth that Maundy Thursday demands we acknowledge: We don’t know! We weren’t there! Just as we have all faced those frightening futures, we have to face the fact we don’t know, not with scientific certainty; we believe. Despite our doubts, we have faith. Indeed, our doubts drive us toward faith. As pastor and Christian apologist Bobby Conway says,

Our hosannas, as Dostoyevsky observed, are born in a furnace of doubt.[18] A Presbyterian pastor from Texas named Jim Rigby once wrote:

A religion which does not celebrate doubt as fully as it celebrates belief can produce only delusion. * * * Perhaps words like “faith” and “prayer” should be understood more deeply as the struggles of our deepest center to understand and change our world for the better. Your “hosanna” will not found by clutching the teachings of the dead. It is hiding in the world’s problems and in your fears. “Faith” is a species of courage.[19]

Which brings us back to Jesus on the night before he died: “Take courage,” he said, “I have conquered the world!”[20] Despite any doubts, despite any fears, despite what must surely have been that “small voice” in the back of his mind, he

took a loaf of bread, and when he had given thanks, he broke it and said, “This is my body that is for you. Do this in remembrance of me.” In the same way he took the cup also, after supper, saying, “This cup is the new covenant in my blood. Do this, as often as you drink it, in remembrance of me.”

As often as we eat this bread and drink this cup, we are there and we do know because, despite our doubts, despite our fears, despite our nights at our own “stones of agony,” we have faith that our Lord, who is like us, his brothers and sisters, in every respect, has made the sacrifice of atonement for our sins and for the sins of all people; and we proclaim his death and resurrection until he comes again.[21] Amen.

This homily was offered by the Rev. Dr. C. Eric Funston on Maundy Thursday, March 29, 2018, to the people of St. Paul’s Episcopal Church, Medina, Ohio, where Fr. Funston is rector.

The illustration is The Agony in the Garden of Gethsemane by El Greco, c. 1590. It hangs in the Toledo Museum of Art, Toledo, Ohio.

[19] Jim Rigby, “Hosana” is born in the furnace of doubt, blog entry at jimrigby.org online (Return to text)