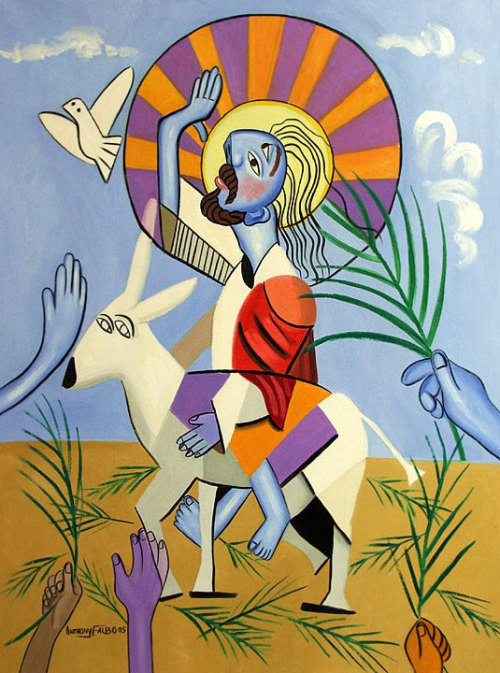 Today we are commemorating Jesus’ entry into Jerusalem at the beginning of the week that would culminate in his death on the cross of Calvary. Somewhat contrary to common sense, this has come to be called the “triumphal entry.” I don’t know who first applied this term to Jesus making his way from Bethany and Bethphage, through the Kidron Valley, also known as the valley of Jehosophat or the valley of decision, into the holy city. I’ve often thought that whoever it was must surely have been a master of irony, or perhaps of sarcasm, for the procession was anything but a triumph!

Two scholars, Marcus Borg and John Dominic Crossan, have suggested that much more than a fulfillment of the Zecharian prophecy that the messiah, the king would come gently bringing salvation, riding on a donkey’s colt,[1] Jesus’ parade was a mockery of the Roman tradition of military parades, particularly the sort Pontius Pilate might have used to enforce imperial domination.[2]

To appreciate their suggestion, it’s necessary for us to understand the nature of these parades. We have a word in English, triumph, the adjectival form of which we apply to Jesus’ parade, which we use and understand as a synonym to the word victory. But it derives from the name of a particular sort of military parade practiced by the Romans, the triumphus. In Roman tradition, the triumph happened after a victory was won, but only in Rome, only after certain victories and only for certain victors. It has been said that the triumph was “one of the most dazzling examples of the theme of spectacle in Roman culture,” imbued with “theatricality” and designed primarily to persuade its audience of the greatness of the conquering general and of Rome itself.[3]

As described by scholar Amber Lunsford of the Ohio State University:

The procession consisted of the spoils of battle taken from the defeated enemy, including armor and weapons, and sometimes even sculpture and other artwork taken from the captured cities. The captured enemies themselves were also led in the parade; enemy kings, leaders, and generals were particularly coveted as part of the triumphal spectacle. Following the captives came the triumphing general himself, riding in a chariot, wearing the clothes of a triumphator, and accompanied by a slave, who held a wreath over the general’s head and reminded him of his mortality. The general’s army marched behind him, singing songs and making jokes at their leader’s expense. The whole procession made its way through the streets of Rome and up the Capitoline hill, where sacrifices and vows were made to Jupiter.[4]

Borg and Crossan propose that Pontius Pilate may have engaged in something like a triumph each year in Palestine at the time of the Passover. To engage in this sort of ego- and imperial-image boosting military parade would have been in keeping with what we know about Pilate and his personality.

The Roman Emperor Tiberius appointed Pilate, a career military man and member of the Roman aristocracy, prefect or procurator of the provinces of Judaea, Samaria, and Idumæa in 26 A.D. While the typical term for a Roman prefect was 1–3 years, Pilate ended up being in Palestine for ten years.

As a Roman prefect, Pilate was granted the power of a supreme judge, which meant that he had the sole authority to order a criminal’s execution. His duties as a prefect included such mundane tasks as tax collection and managing construction projects. But, perhaps his most important responsibility was that of maintaining law and order, and he is reported to have done so by any means necessary. What he couldn’t negotiate he is said to have accomplished through brute force.

Non-Christian authors (Tacitus, Philo, and Flavius Josephus) mention not only his name but also many details concerning his person and his rule. In a letter from Agrippa I, cited by Philo, his character is severely judged. It speaks of unlimited harshness, pride, violence, greed, insults, continual executions without trial, and endless and unbearable cruelty. His insensitive policies brought Pilate into conflict with the Jews. They were continually offended with Pilate’s statues which the Jews considered idolatry (Exod. 20:4). The Jews opposed the entry into Jerusalem of soldiers with banners bearing the likeness of the emperor, and also to the placing of shields inscribed with the Roman emperor’s name inside Herod’s palace.[5]

Most of the time, Pilate stayed at his seaside villa in the town of Caesaria Maritima. But on special occasions like Passover he made the 40-mile march to Jerusalem to keep an eye on the crowds who would flock to worship and offer sacrifices at the Temple, and more importantly to flex and demonstrate Roman muscle and military might. His pseudo-triumph was one way of doing this. Borg and Crossan describe the spectacle this way:

Pilate’s military procession was a demonstration of both Roman imperial power and Roman imperial theology … it was the standard practice of the Roman governors of Judea to be in Jerusalem for the Jewish festivals … to be in the city in case there was trouble … The mission of the troops with Pilate was to reinforce the Roman garrison permanently stationed in the Fortress Antonia, overlooking the Jewish Temple and its courts … Imagine the imperial procession’s arrival in the city. A visual panoply of imperial power: cavalry on horses, foot soldiers, leather armor, helmets, weapons, banners, golden eagles mounted on poles, sun glinting on metal and gold. Sounds: the marching of feet, the creaking of leather, the clinking of bridles, the beating of drums. The swirling of dust. The eyes of the silent onlookers, some curious, some awed, some resentful. Pilate’s procession displayed not only imperial power, but also Roman imperial theology. According to this theology, the emperor was not simply the ruler of Rome, but the Son of God … For Rome’s Jewish subjects, Pilate’s procession embodied not only a rival social order, but also a rival theology.[6]

In contrast to Pilate, there is Jesus. Jesus, who rides neither stallion nor chariot but walks from place to place. Jesus, who is accompanied not by soldiers and cavalry, but only by a few close friends. Jesus, who socializes not with the high-and-mighty but with the poor and the outcast. Jesus, who is proclaimed Son of God not through the power of empire, but by the Spirit in love.

Jesus comes to Jerusalem in a much different manner, a manner which not only fulfills Jewish prophecy, but which lampoons Rome’s military prowess. With none of the trappings of imperial power, nothing at all like Pilate’s military parade, Jesus rides into town on a donkey’s colt. And the crowds go wild: “Hosanna!” they shout. “Save us!” is what that means. “Save us, King of Israel! Save us, One who comes in the name of God!”

Yesterday, on the Mall in Washington, DC, on the Town Square here in Medina, and in hundreds of towns and cities not only in the United States but around the world, people young and old gathered in solidarity with the survivors of the mass murder in Parkland, Florida, that terrible tragedy at Marjory Stoneman Douglas High School. In the March for Our Lives, people witnessed peacefully to the message that life will triumph over death. Although the focus of yesterday’s march was a call for common sense firearm regulation, the March for Our Lives’ message was the same as other events which our country’s national mall has hosted: the marches for peace during the Vietnam Era, the marches for civil rights under the leadership of Dr. Martin Luther King, Jr., the Women’s March of last year.

Like Jesus’ triumphal entry into Jerusalem, these marches contrast with military parades, ancient and modern. They witness to the power of gentleness and nonviolence, to the victory of love over hatred, to the conquering of death by life. Military parades come and go, military conquerors come and go, wars come and go, but life and love persist. The power of empire cannot beat them down. All the powers of hell cannot conquer them, for we have the promise of the God of love incarnate in Christ Jesus: “Remember, I am with you always, to the end of the age.”[7]

Palm Sunday begins our annual retelling of the story; Holy Week, culminating with the Triduum which begins on Maundy Thursday evening and encompasses Good Friday, Holy Saturday, and Easter Sunday morning helps us to remember, in the words of an old hymn, that “cross and Easter Day attest, God in man made manifest.”[8] Triumphant and victorious but, nonetheless, humbly and gently, the Lord of life and of love arrives to save and to stay. No Roman triumph, no military parade of any nation could ever witness to such power.

This homily was offered by the Rev. Dr. C. Eric Funston on Palm Sunday, March 25, 2018, to the people of St. Paul’s Episcopal Church, Medina, Ohio, where Fr. Funston is rector.

The illustration is Behold the Lamb of God by American artist Anthony Falbo. Prints can be purchased here.