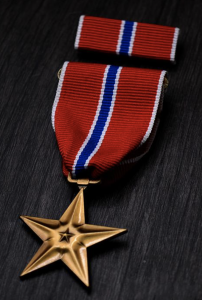 A book entitled Stories for the Heart was published a few years ago by inspirational speaker Alice Gray. It is a compilation of what Gray calls “stories to encourage your soul;” one of them is the following story, whose original author she says is unknown. It may not be true, but I (for one) hope it is:

It was a few weeks before Christmas 1917. The beautiful snowy landscapes of Europe were blackened by war. The trenches on one side held the Germans and on the other side the trenches were filled with Americans. It was World War I. The exchange of gunshots was intense. Separating them was a very narrow strip of no-man’s land. A young German soldier attempting to cross that no-man’s land had been shot and had become entangled in the barbed wire. He cried out in anguish, then in pain he continued to whimper.

Between the shells all the Americans in that sector could hear him scream. When one American soldier could stand it no longer, he crawled out of the American trenches and on his stomach crawled to that German soldier. When the Americans realized what he was doing they stopped firing, but the Germans continued. Then a German officer realized what the young American was doing and he ordered his men to cease firing. Now there was a weird silence across the no-man’s land. On his stomach, the American made his way to that German soldier and disentangled him. He stood up with the German in his arms, walked straight to the German trenches and placed him in the waiting arms of his comrades. Having done so, he turned and started back to the American trenches.

Suddenly there was a hand on his shoulder that spun him around. There stood a German officer who had won the Iron Cross, the highest honor for bravery. He jerked it from his own uniform and placed it on the American, who walked back to the American trenches. When he was safely in the trenches, they resumed the insanity of war.[1]

That story may or may not be true: as I said, I hope it is. Here is another story from the next Great Way that I know is true. This certificate is entitled “Headquarters, Sixty-Third Infantry Division, Office of the Commanding General, Bronze Star Medal Citation.” It reads as follows:

Raymond Y. Funston, 37525672, Corporal, Field Artillery, Battery “B”, 862nd Field Artillery Battalion, for meritorious achievement from 17-20 March 1945, in the vicinity of Ensheim, Germany. During the offensive operations to breach the Siegfried Line, Corporal Funston, although repeatetly [sic] exposed to enemy fire, relayed the commands of the forward observer to the radio operator. Throughout this entire period he aided his officer immeasurably in the task of providing the assault infantrymen with constant close artillery support enabling them to achieve their objectives. In the course of the action, Corporal Funston was wounded by enemy artillery fire, but finished his fire mission before submitting to medical treatment. The devotion to duty and courage displayed by Corporal Funston reflect credit upon himself and on the Armed Forces of the United States. Entered military service from Winfield, Kansas.

Raymond Y. Funston (usually called “York”) was my father. The young soldier in Alice Gray’s story and my father were not unique. Similar stories of bravery and courage, of grace under fire, of honorable treatment of the foe as well as of their fellows, can be told about literally thousands of servicemen in the armies, navies, marine corps and air forces of many nations. This weekend, we remember and honor those who served in the Armed Forces of this country.

Contrast these stories with this one:

A fellow was coming out of church one day, and the preacher was standing at the door as he always was to shake hands. He grabbed the fellow by the hand and pulled him aside. The Pastor said to him, “You need to join the Army of the Lord!” The man replied, “I’m already in the Army of the Lord, Pastor.” Pastor questioned, “How come I don’t see you except at Christmas and Easter?” He whispered back, “I’m in the secret service.”

Now that old joke, I’m pretty sure, isn’t factually accurate, and I’m pretty sure it never really happened. But I’m also sure that it is very true! There are lots of members of the army which is the church who exhibit little to none of the dedication and devotion to service of our nation’s military servicemen and women.

As I was writing this sermon, I first wrote, “This is sad.” But I erased that and wrote “This is really too bad” — then I erased that, because neither “sad” nor “really too bad” are strong enough! It’s much worse than that — it’s shameful and it’s sinful! For (as much as I personally dislike the term “spiritual warfare”) we Christians are, indeed, in an army engaged in war — a war at once more violent and more subtle, at once much greater and very little noticed, in comparison to those Great Wars of 1917 and the 1940s.

In those wars, soldiers like that young fellow in the trenches, like my father in Ensheim, were under orders. They had been given instructions, a mission, and they committed themselves to it, even in the face of the high probability, even the certainty of severe injury and death. We, too, have been given our instruction, our mission. Because today, in addition to being Memorial Sunday, is also Trinity Sunday, we heard our instructions read in the lesson from Matthew’s Gospel: “Go therefore and make disciples of all nations, baptizing them in the name of the Father and of the Son and of the Holy Spirit, and teaching them to obey everything that I have commanded you.”[2] Those are our marching orders! They put us right on the front line of the greatest war in human history: the battle between right and wrong, good and evil, Truth and the Big Lie!

This is not a new idea. That our baptism is our enlistment in the Army of the Lord is an idea straight out of Holy Scripture: St. Paul admonished Timothy to be “a good soldier of Christ Jesus.”[3] He used the image of equipping a soldier of his day, a Roman legionnaire, to explain the duty of every baptized Christian in his letter to the church at Ephesus:

In similar terms, Paul wrote to the Christians in Thessalonica, whom he admonished to “put on the breastplate of faith and love, and for a helmet the hope of salvation.”[5]

The spiritual battle in which we have been enlisted through our baptism is every bit as dangerous as any war ever waged in human history. There have been and will continue to be casualties; we call them “Martyrs” — hopefully we won’t be called to be among them — some of these are St. Alban of Britain, St. Lucy of Sicily, James Hannington of Africa, and John Coleridge Patteson of Melanesia. Other good soldiers in God’s Army escape that fate, but are no less revered in the memory of the church; we call them “Confessors” — some of these are St. Augustine of Canterbury, St. Patrick of Ireland, Dame Julian of Norwich, John Henry Hobart of New York, and James Dekoven of Wisconsin. These would all be the Purple Heart and Bronze Star recipients in this war with “the cosmic powers of this present darkness.” If their names are unfamiliar to you, you should get to know them — they have set the example for us! They are the heroes of the Army of the Lord and we should all know more about them than we do.

And I commend the remembrance and reverence today and tomorrow of those who have served our country. I am going to place my father’s Bronze Star medal and the Purple Heart he was awarded for the same cause on the Altar. Not because they are my father’s, but because they symbolize the sacrifice every man and woman who serves in the Armed Forces is willing to make, a sacrifice many who deserve our gratitude have made. In your bulletins you will find an insert entitled “A Prayer for Memorial Day” — I would ask you to stand and, after a moment of silence, offer this prayer with me:

Almighty God, we commend to your gracious care and keeping all the men and women of our armed forces at home and abroad. Defend them day by day with your heavenly grace; strengthen them in their trials and tribulations; give them courage to face the perils which beset them; and grant them a sense of your abiding presence wherever they may be. Especially today, accept our prayers on behalf of your servants who have died in the service of their country, and grant them entrance into the land of light and joy, in the fellowship of your saints; through Jesus Christ our Lord, who lives and reigns with you and the Holy Spirit, one God, now and for ever. Amen.[6]

This homily was offered by the Rev. Dr. C. Eric Funston on Trinity Sunday, May 30, 1999, to the people of St. Francis of Assisi in the Pines Episcopal Church, Stilwell, Kansas, where Fr. Funston was rector from 1993 to 2003.

The lessons for the service were Genesis 1:1-2:3; Psalm 150; 2 Corinthians 13:5-14; and St. Matthew 28:16-20. These lessons are from the Prayer Book lectionary for Year A and differ slightly from the Revised Common Lectionary (see The Lectionary Page). The homily, however, focuses on the Gospel lesson which is common to the two lectionaries.