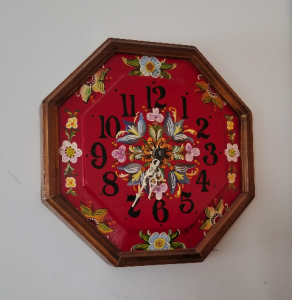 I’ve decided to spend at least one hour each morning on the task of writing. That’s the advice given all aspiring writers, “Just do it. Set aside time and discipline yourself to do it. Write whatever comes to mind.” So here I am, coffee cup at my side, fingers on the keyboard of my laptop, sitting at the kitchen table. I would prefer to use a paper and pen, but the arthritis in my hands simply does not allow me to actually write much anymore. I can “type” so much faster and more accurately than I can scrawl now (and auto-correct, as much as I hate it on my phone, is a great aide in my word processing application).

The furnace is on. It’s snowing outside and the Weather.com app on my phone said it was 21ºF when last I looked. There was a weather notice of a burst of snowfall moving through the area limiting visibility and making roads dangerously slick.

Anyway, the furnace is on and I can hear the rush of air through the registers. Normally, I never pay attention to this; I don’t even notice it. It is simply background white noise. This morning, however, it seems to be abnormally loud, very noticeable. If I were still in the preaching business, I might make myself a note about the furnace background noise, a reminder that it could be used a sermon illustration. I don’t know what biblical text or theological idea it might illustrate, but that’s the nature of sermon illustrations, isn’t it? You don’t know how you will use them until you do. File this one under “background noise” for now and move on.

And, just as I finish writing that paragraph, the furnace turns itself off and the quiet, not silence but quiet, descends. The refrigerator is humming, and there is a rhythmic ticking as of a clock’s hands moving, but I know of no functioning analog clock in this area of the house.

There is an octagonal, battery-operated clock hanging over the refrigerator, but I don’t believe the battery has been changed in it for years. Nonetheless, I get up and check it out. Sure enough, that’s the source of the ticking. Apparently, my spouse has replaced the battery. If so, I wonder, why didn’t she also set the clock to the correct time? It’s about 9:00 a.m. but this clock’s hands are at 6:35. Perhaps they are loose and not staying in position.

The clock was a wedding present, so we’ve had it for almost 39 years. It has a predominantly red face with black numbers and is decorated with a symmetrical design of hand-painted flowers. It looks vaguely Scandinavian; I believe this sort of hand-painted decoration is called “tole painting”. The clock was painted by one of my wife’s aunts, now deceased. This decorative craft was just about the only feminine thing the woman did. She was a Nevada rancher who, with her husband, ran a large herd of cattle and, on her own, broke and trained cutting horses. She broke every gender stereotype in the book. I remember some of the guests at our wedding being a bit scandalized when she showed up in her everyday attire of Western cowboy shirt, blue jeans, and boots, her hair cut quite short. I’m sure that more than one probably thought she was a lesbian. I have to admit that I have a very difficult time imagining her sitting at a table or easel carefully painting the delicate flowers on our clock.

Anyway, the clock ticks along. The refrigerator hums. The dog, curled up on a green fleece blanket, is snoring. There are other pops, chirps, soft thuds, the sounds of a house moving in winter, the microscopic stretching and contracting of sheet metal ducts cooling in the basement. There is never silence; there is only quiet. A disturbed quiet.

Isn’t that, perhaps, what Lent is? A disturbed quiet. Six weeks, forty days, of pausing to take note of the background noises. Turn away from the loud, overwhelming screams of politics and economics and tragedies and celebrations, and pay attention to what lies beneath, what sustains it all, what makes it all possible.

I had my knee replaced in January and after four weeks of in-home health care visits, I was released into the gentle ministrations of out-patient physical therapy. Twice a week I drive to what is really an oddly furnished gymnasium and massage parlor to be put through my paces by one of three physically fit women who, every time, ask this question, “On a scale of 0 to 10, how would you rate your pain?” I hate this question! I am unable to answer it.

As I sit here in the disturbed quiet of my kitchen, in addition to the background sounds of a house in winter, I am also aware of the muscles, tendons, and skin of my leg. Is this awareness “pain”? Where does it rank on that scale? I wouldn’t say my knee “hurts,” exactly, but neither would I say it is entirely comfortable. I could, arguably, say it is a zero on the pain scale, but I don’t think that would be accurate. So how far up do I move on the scale? One? Two? Three seems to high.

What about my Lenten “pain scale”? How do I rate the condition of my spirit?

As I ponder this question, the furnace fires back up. The louder rush of warmed air through the floor vents, though not loud and usually not even heard, drowns out the refrigerator hum, the dog’s heavy breathing, and even the ticking of the tole-painted wedding-gift clock. The phone rings (a medical supply company on the line); the coffee maker signals its “I’m turning myself off” alarm; and my smart-phone notifies me of an in-coming text message. The world with its overwhelming sounds demands my attention. It’s a good thing I have another 39 days to assess (and maybe do something about) my spiritual well-being.