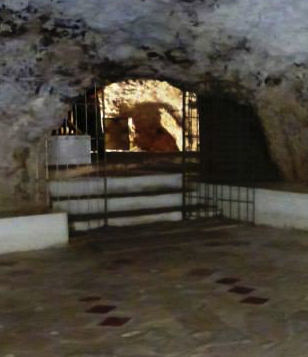 A wandering Aramean was my ancestor; he went down into Egypt and lived there as an alien, few in number, and there he became a great nation, mighty and populous. – Deuteronomy 26:5

I’m not preaching on the First Sunday of Lent, but if I was . . . I might preach about Lenten community.

“What?” some will ask. “The gospel lesson[1] is about Jesus going off into the desert to be alone and to fast for forty days! Shouldn’t we be preaching about solitude and sacrifice and privation and that sort of thing? You know, Lenten discipline?”

Well, sure, you can do that. I’ll bet you’ve done that every year. I’ll bet our congregations have heard dozens, hundreds of Lenten discipline sermons. They can take another one.

Lent may begin with a story of solitude and privation, but that is not what it is about. It is about community and relationship.

A few years ago, my spouse and I were privileged to make a pilgrimage to Palestine and Israel. It will probably end up being a once-in-a-lifetime event, although I hope to return. There were many, many experiences on that trip in the company of a wonderful group of people that often return in memory, but today, pondering the meaning of Lent, one day in particular stands out, July 1, 2014.

That day began with a pre-dawn bus trip to a scenic overlook called Mizpe Yeriho (I believe it means “view of Jericho”) where we watched the sunrise over the Wadi Qelt, a tributary stream of the Jordan in the Jericho valley; the Wadi Qelt may have been one of the paths by which people of Jesus’ time walked from Jericho to Jersulam. Each of our party in the silence of his or her thoughts observed the sunrise and then it was my privilege to celebrate the Eucharist in this desolate desert place. Like Jesus in the gospel lesson, we began in solitude but that solitude led us into community.

Not long thereafter, we drove into the city of Jericho and took a tram from the valley floor to a nearly inaccessible cave system on what is called the Mount of the Temptations. Tradition teaches that Jesus spent the forty days described in the gospel lesson in one of these caves outside of Jericho and that it was here that Satan offered him the Temptations. The cave has, for centuries, been incorporated into a Russian Orthodox monastery and church. A small community of aged monks now live here and support themselves by seeking pilgrim donations. Jesus’ place of solitude and privation has become a place of community supported by the international community of Christian pilgrims.

The lesson from the Hebrew scriptures that accompanies the gospel text is includes the admonition to Israelites to remember and recite this statement as historical fact: “A wandering Aramean was my ancestor; he went down into Egypt and lived there as an alien, few in number, and there he became a great nation, mighty and populous.”[2] (Confession: I always listen carefully as readers assay this lesson; I’m often amused by their mispronunciations of the word “Aramean”.) This reminder offers the same lesson as the gospel story: solitude leads to community. The singularity of that wandering Aramean ancestor is transformed by the grace of God into the populous community of a great and mighty nation, as through the same grace the Lenten solitude of Christ becomes the Eucharistic community of the church.

There’s certainly nothing wrong with preaching about Lenten discipline, about fasting and privation, about taking on some positive task for the season, and many of our congregants (especially those new to the faith) will benefit from instruction in Lenten practice, but let’s not ignore the purpose and goal of discipline and practice. Lent isn’t really about solitude, it’s about community. Remember, Lent is leading somewhere.

The illustration is the entrance to the Cave of the Temptation at the Russian monastery at the Mount of the Temptation; the cave has been made into a chapel in which no photography is permitted.