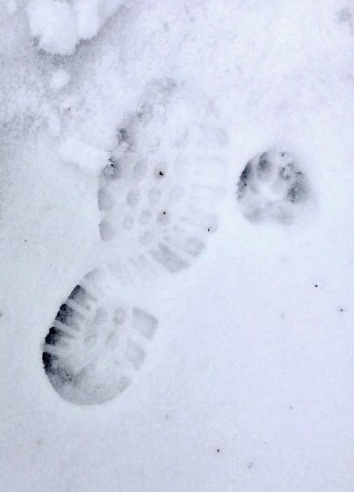 Yesterday afternoon the dog and I went for a walk in the snow. I should clarify: we went for a walk while the snow was falling and we walked on the sidewalk. The snow was that sort of big, fluffy-flake variety that my wife calls “snow globe snow.” As it coated the sidewalk, the path had the appearance of the first layer of blown-in insulation in an attic, a cottony, almost-fibrous, semi-transparent white coating laid over the concrete.

I was wearing a pair of slip-on canvas shoes with a textured sole, the sort that leaves very distinct patterned footprints in such snow or on the damp sand of undisturbed beaches. We’ve had several such snow falls this year and I’ve noticed that when the snow continues to fall and covers up those footprints, they harden. Later, when my neighbor or I get out our snow blowers and snow shovels and clear the sidewalk, those footprints left in the first snow fall remain, like the white-on-white pattern of an expensive dress shirt, evidence that someone has walked this way before.

Of course, when I see those frozen-in-place, not-shoveled-away footprints I usually have no idea who made them. The distinctive tread patterns are gone and all that is left is the white imprint of a shoe or boot. I don’t know if they are mine, my neighbor’s, or some stranger who happened to take a walk unnoticed through our neighborhood.

As I thought about those footprints yesterday, they put me in mind of photographs I have recently seen on Facebook of a church where I served as half-time rector for ten years. (As I write those words, I am tempted to launch into my well-rehearsed rant about the utter foolishness and complete falsehood of the very notion of “part-time clergy” positions, especially sole pastorates … but I won’t. After all, this is a Lenten reflection and part of the idea here is to exercise discipline, so I won’t. That wasn’t what I had intended to write about; I’ll stay on point.)

It was a small parish with a small clapboard chapel as its building. While I was there, I led the congregation in remodeling the worship space and the undercroft, and adding an education building to the north of the chapel. The basement of the addition was left unfinished by the contractor and completed as a parish hall and kitchen through the “sweat equity” of congregants and clergy; together with other volunteers, I put in a lot of hours erecting studs, running electrical cables, installing outlets and fixtures, hanging drywall, etc. Since I was “on site” more often than others, I also did a lot of things by myself.

Looking at pictures of the sanctuary, I see the white-molding-framed sky-blue panel behind the altar cross which I painted, the purple-and-gray Lenten antependia which I designed and sewed, the simple glass tabernacle I spent hours shopping for visiting second-hand stores and those used church goods businesses that so often are the graveyards of ecclesiastical equipment, and the speakers for the electronic organ for which my family gave a large donation in memory of my mother.

It’s been nearly sixteen years since I left that place and more than twenty since all that work was done. As is the case with church congregations in today’s world, nearly all of the people who worshiped there then are gone and an entirely new community has replaced them. Those things which I see and which bring back memories of my deep, deep involvement in that place are, to that new community of parishioners, like the frozen footprints on the concrete path of our neighborhood sidewalk. They have no idea whose blood, sweat, and tears are invested in them. And it is entirely possible that like those footprints, those things will disappear. In fact, I hope they do: small congregations should grow and outgrow small worship spaces like that one. Church buildings should change; we should refurnish them, remodel them, abandon them, or replace them just as much as we should preserve them. Church buildings are tools for ministry and they should meet the needs of the community that uses them.

That is what we did at my last church, I hope. While we restored and improved the pipe organ, restored the reredos and moved the high altar back to its original position, and took steps (through installation of air conditioning and proper regulation of heating) to preserve the stained glass, we also remodeled the sanctuary to improve its flexibility and use as a performance space, remodeled the unused undercroft into an office suite and the former offices into a chapel, brides’ parlor, and nursery, and added what came to be called “the Gallery” as a gathering and fellowship space functioning both as entryway and as parish hall. Although I had cherished a fond hope someone might suggest naming the Gallery for me (as other parts of the building have been dedicated to other former rectors), no one did … and walking in the snow I realized that it doesn’t matter. There might have been a plaque put up on that other parish’s education building or in this parish’s Gallery, but over time memories would fade just as those white-on-white footprints melt. And those spaces might not even be preserved at some future time; they might be remodeled into non-existence.

Our Buddhist friends encourage us to practice detachment; the Dalai Lama teaches that this means letting go of the sting of discriminatory emotion setting one free to practice true compassion. This, I believe, is the point of Lent and Lenten disciplines; this is a time to detach, at least on a temporary basis which might encourage a more permanent letting go of those things that distract us. I’ll never let go of the memories of serving in those two parishes, memories excited by photographs on Facebook, but I can let go of the emotions, especially the disappointments and sorrows, some of those memories evoke; I can let go of vain dreams of lasting memorials. I can detach from them and let them melt away and evaporate like footprints in the snow.