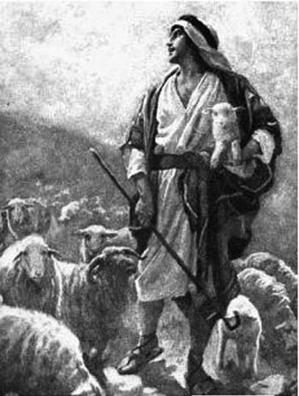 Most of the Bible texts from the Revised Common Lectionary this week present us with the well-worn and comfortable Biblical image of sheep and shepherds. Jeremiah rails against the shepherds of Israel “who destroy and scatter the sheep of [the Lord’s] pasture,”[1] pronouncing God’s intention to come and be the Shepherd in their place. “I myself,” says God, “will gather the remnant of my flock out of all the lands where I have driven them, and I will bring them back to their fold, and they shall be fruitful and multiply. I will raise up shepherds over them who will shepherd them, and they shall not fear any longer, or be dismayed, nor shall any be missing, says the Lord.”[2]

The Psalmist picks up the ball and runs with it in what may be the most famous piece of Hebrew poetry ever written: “The Lord is my shepherd,” he declares and we proclaim it with him. And then Mark’s Gospel continues down the field with the observation that Jesus “saw a great crowd; and he had compassion for them, because they were like sheep without a shepherd.”

The odd man out is the Epistle lesson, part of a letter claimed to be from Paul to a church in the Asia Minor port city of Ephesus. Not a single sheep or shepherd to be found. Instead we get talk of circumcision, of aliens and strangers, of dividing walls being torn down, and a “holy temple,” the “household of God, built upon the foundation of the apostles and prophets.”

But let’s be clear, neither the Old Testament prophet, nor the liturgical poet of the Psalms, not the Evangelist writing of Jesus are really talking about sheep and shepherds. They are talking about politics. In his commentary on the 23rd Psalm, Presbyterian scholar J. Clinton McCann, Jr., writes:

The psalm begins with a simple profession. In the ancient world, kings were known as shepherds of their people. Thus to profess “The Lord is my shepherd” is to declare one’s loyalty to God and intention to live under God’s reign. It was the responsibility of kings to provide for and protect the people, but they frequently failed to do so.”[3]

That failure of the king to care for the people is the very point of Jeremiah’s prophecy, and it is at the core of Mark’s observation about Jesus and the crowd: the Messiah saw that the people were hurting and oppressed under the reign of political tyrants, the emperor of Rome, his legions, and his puppets.

It would be easy to ignore the Epistle lesson and focus on the familiar metaphor of sheep dependent upon wayward shepherds and what it says to us as people under of rule of political leaders who don’t always measure up. You know me and my penchant for that admonition often credited to theologian Karl Barth that preachers should stand in the pulpit with the Bible in one hand and the newspaper in the other! But I could not get my mind off the last few verses of the Epistle:

So then you are no longer strangers and aliens, but you are citizens with the saints and also members of the household of God, built upon the foundation of the apostles and prophets, with Christ Jesus himself as the cornerstone. In him the whole structure is joined together and grows into a holy temple in the Lord; in whom you also are built together spiritually into a dwelling place for God.[4]

Especially, those last few words: “You are built together into a dwelling place for God.” This is the Greek plural “you” here; the church made up of Jews and Gentiles, men and women, friends and strangers, citizens and aliens, slaves and free persons, joined together into a holy temple to be the home of God. I could not get my mind off that image.

The Epistle’s author (we’ll call him “Paul” even though scholarly opinion is pretty unanimous in believing this letter wasn’t actually written by the apostle) lived and wrote in a time when the Temple in Jerusalem had been destroyed. It’s possible that he had that old Jewish building in mind when he wrote that the people of the Church are “joined together and grow into a holy temple,”[5] but it is also possible that both he and his readers would think of something else.

The letter was written, many scholars believe, sometime during the last two decades of the First Century. During most of this time, Domitian was emperor of Rome: he ascended the throne in 81 AD and was assassinated in 96 AD. He was, in many respects, a traditionalist: he personally saw to it that ancient customs and morals of Roman religion were observed throughout his reign. He revived the imperial cult which had fallen out of use during the reign of his father Vespasian, and he cultivated religious devotion to the imperial family. Although disputed by some historians, his contemporaries Suetonius and Cassius Dio assert that he arrogated to himself the title Dominus et Deus, meaning “Master and God.” This emperor cult was in full swing in Asia Minor at the time the letter to the Christians in Ephesus was probably written. In Asia Minor it included the practice of building a temple to the emperor.

The writer of this epistle and those to whom it is addressed lived in the midst of Asia Minor’s active period of erecting these temples to the emperor; New Testament scholar Pheme Perkins in her commentary on the epistle notes that cities throughout the region erected such temples to curry imperial favor.[6] No fewer than 77 emperor temples have been identified in the cities of Asia Minor.[7] The letter’s author and his audience may just have had those imperial cult buildings in mind.

So our odd man out among today’s lessons may not be all that odd nor that far out after all. To declare the Lord God to be one’s shepherd, as the prophet, the psalmist, and the evangelist do, was a political statement saying that one’s allegiances lay elsewhere than with an earthly ruler. To declare that one’s community is a “holy temple” and a “dwelling place for God,” was similarly a political declaration rejecting the pretensions of an earthly leader. These are political statements, but not partisan declarations.

A few days ago, a friend of mine, the Rev. Peggy Blanchard Hunt, and I were discussing this epistle lesson and the image of the church community as the dwelling place of God. Peggy said,

[It’s] tempting to envision it as this soaring cathedral, but I bet it’s more like a brightly colorful bazaar, filled with all kinds of colored tents, open to one another, some offering joyful shared conversation including everyone equally, some quietly shaded retreats offering quiet nooks for listening or for silence, and here and there gatherings sharing music.[8]

Another colleague, the Rev. Ann Markle, joined in, saying, “I can’t shake the image of a carnival, or the midway of a fair!”[9]

Within such a bazaar or carnival or fair, there are many things to do, different activities to enjoy, different pleasures to partake, but they are all united by the overarching reality of the festival or pageant. There are many political positions one can take in the earthly community, but they should all be informed by the same moral considerations.

We must make an important distinction between partisan politics and political morality. As the Rev. M. Catherine Volland, rector of Saint Bede’s Episcopal Church, Santa Fe, NM, has recently observed:

Conservatives and liberals can both offer worthy alternatives to the issues that beset us. We may disagree, for example, on the best way to help the poor – is it stimulating the economy or strengthening the safety net? But concern for the poor is a moral stance. We may disagree on best ways to sanction countries with systemic human rights violations – is it defensive military presence or economic sanctions? But concern for basic human rights is a moral issue. Red and blue may disagree on immigration issues – should we tighten immigration or open our borders wider? But how we treat those who are in violation of our existing policies is a matter of morality in practice.[10]

There are many political positions one can take within the earthly community of humankind, but they must all be conformed to the overarching reality of the reign of God: the sovereignty of love and the commonwealth of morality. To claim the Lord as one’s shepherd and to declare one’s community as the holy temple and dwelling place of God is not to take a position on the political spectrum: it is to view and judge every position on that spectrum from the moral perspective of the Gospel. It is to declare that love of God and love of one’s fellow human beings are paramount, standing over and against any and every political position.

O God, by whom the meek are guided in judgment, and light rises up in darkness for the godly: Grant us, in all our doubts and uncertainties, the grace to ask what you would have us do, that the Spirit of wisdom may save us from all false choices, and that in your light we may see light, and in your straight path may not stumble; through Jesus Christ our Lord. Amen. [11]

This homily was offered by the Rev. Dr. C. Eric Funston on the Ninth Sunday after Pentecost, July 22, 2018, to the people of St. Paul’s Episcopal Church, Medina, Ohio, where Fr. Funston is rector.

[7] Morten L. Warmind, The Cult of the Roman Emperor before and after Christianity, Scripta Instituti Donneriani Aboensis, Volume 15 (The Problem of Ritual), Abo, Finland, 1993, pages 211-220 (Return to text)