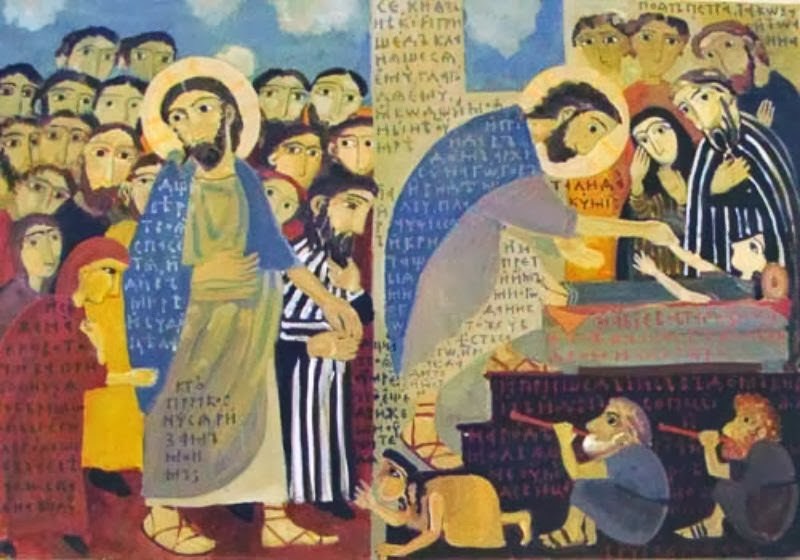 So when she heard that there was even the remotest possibility of liberation, she steeled her resolve, left her home, and sought it out. We don’t know how far she had to walk, what trials she had to endure. We can imagine what it must have been like trudging through the hot, desert sun. Her younger children were with her and as terrified as she was. And yet they pushed on until he was in sight.

And when she did so, the Immigration and Customs Enforcement officer arrested her, took her children from her, and put her in jail. Hers was not to be the story of the woman in our gospel lesson.

The story of the woman with a hemorrhage is not merely a story of miraculous healing. It is a story of liberation. This unnamed woman was in far more danger from the society in which she lived than she was from her medical condition, as serious as that was. African bible scholar Sister Teresa Okure, drawing from her own cultural heritage, reminds us:

The physical scourge was nothing compared to the social trauma and stigmatisation of her socio-cultural and religious heritage. A bleeding woman was legally and socially unclean in herself and a source of uncleanness to anyone and anything she touched or that touched her, “for seven days” or for “as long as the blood discharge lasts.” In some traditional African cultures a menstruating woman had to dwell apart in a makeshift abode outside the house; she could not cook for her family or associate with others till the bleeding stopped. The pain was bad enough, but being made monthly a social outcast in her home, family and society exposed her menstrual state to everybody, including her children, and diminished her human worth. The embarrassment and psychological trauma caused by such dehumanisation can hardly be imagined. [1]

In this week in which we are about to celebrate our liberties, our own nation’s liberation from imperial oppression, we cannot ignore the social liberation aspects of this gospel story.

As we are all painfully aware, thousands of refugees are coming not only to our borders but also to the countries of the European Union, they are coming to the predominantly Christian nations of the world from places torn by strife, ravaged by war, disrupted by gang violence, or made unlivable by natural disaster. They are coming from circumstances as sure to damage if not kill them as the 12-year hemorrhage had damaged and nearly killed the woman in Mark’s story. And like her they are coming with little more than hope that simply touching the border will save them.

If you have read the July parish newsletter, you know I’ve spent the last six months dealing with inconclusive medical tests which suggest that cancer, which I beat two years ago, may be back in my life. First an ultra-sound, then a series of blood tests, then a CT-scan . . . all of which show lymph and possibly liver abnormalities, none of them serious enough to raise alarm bells by themselves, but all of them disconcerting. I’m consulting in a couple of weeks with a surgeon about doing a biopsy. As I know many of you know, it’s spiritually and emotionally draining.

It doesn’t help that week before last was the anniversary of my brother’s death from cancer, or that the news is filled with political strife and turmoil, or that a few days ago a friend’s cousin was one of the journalists gunned down in Baltimore at the Capital Gazette newspaper offices. There are times when I just sit and can’t move or even think . . . and I know I’m not alone. I know that many of my friends, many of my ministry colleagues, and many of you are feeling the same sort of spiritual malaise. Regardless of our political affiliations, we are all affected by the dysfunctions of government and society, by news of tariffs and taxes, by the sounds of children crying in cages and of guns fired in our schools and workplaces and places of worship.

On Good Friday our liturgy always includes a recitation of Psalm 22, some verses of which have come to mind in recent days:

Many young bulls encircle me;
strong bulls of Bashan surround me.
They open wide their jaws at me,
like a ravening and a roaring lion.
I am poured out like water;
all my bones are out of joint;
my heart within my breast is melting wax.
My mouth is dried out like a pot-sherd;
my tongue sticks to the roof of my mouth;
and you have laid me in the dust of the grave. [2]

Our first reading this morning from the apocryphal Book of the Wisdom of Solomon reminds us, though, that it is not God who lays us in the grave; we do that to ourselves:

God did not make death,
And he does not delight in the death of the living.
For he created all things so that they might exist;
the generative forces of the world are wholesome,
and there is no destructive poison in them,
and the dominion of Hades is not on earth.
For righteousness is immortal. [3]

Death, physical or spiritual, does not come from God. What comes from God, what flowed from Jesus when the woman with a hemorrhage touched him, when he reached out to Jairus’ daughter (in the other healing story in the gospel lesson), is the immortal power of righteousness.

Sometimes recently I have found myself wishing Jesus would just walk into my room, take me by the hand, and say to me, as he said to the synagogue ruler’s child, “Get up.” I wish I could just stretch out my hand and touch the hem of his robe and feel that righteous energy fill me and heal me and raise me up.

And, of course, he does and I can . . . because I have you. We have one another. As Paul wrote to the Corinthians in today’s epistle, there is a “balance between [one’s] present abundance and [another’s] need, so that [the] abundance [of the second] may be for [the first one’s] need” when it arises. [4] In that abundance, we are Christ, one to another; we are Christ to all those around us. Remember those beautiful words attributed to St. Teresa of Avila:

And to her words we may add, “Yours . . . ours . . . is the garment the hem of which the bleeding of the world reach out to touch.” We are Christ, one to another and to all around us. We are the followers of Jesus who said not only, “Love your neighbor as yourself,” [5] but also “Love your enemies and pray for those who persecute you.” [6] Sometimes we wear the garment; sometimes we are the ones reaching to touch it. And we are always to be the ones reaching out to others and saying, “Get up!” that all may be healed and walk in liberation.

This is especially true of us as Christians who are also Americans whose secular witness is that of a people with a zeal for justice and the strength of forbearance, using our liberty in accordance with God’s gracious will. [7]

Please turn to page 820 in The Book of Common Prayer and join me in seeking God’s empowerment in both our religious and our secular ministries:

Almighty God, who hast given us this good land for our heritage: We humbly beseech thee that we may always prove ourselves a people mindful of thy favor and glad to do thy will. Bless our land with honorable industry, sound learning, and pure manners. Save us from violence, discord, and confusion; from pride and arrogance, and from every evil way. Defend our liberties, and fashion into one united people the multitudes brought hither out of many kindreds and tongues. Endue with the spirit of wisdom those to whom in thy Name we entrust the authority of government, that there may be justice and peace at home, and that, through obedience to thy law, we may show forth thy praise among the nations of the earth. In the time of prosperity, fill our hearts with thankfulness, and in the day of trouble, suffer not our trust in thee to fail; all which we ask through Jesus Christ our Lord. Amen. [8]

This homily was offered by the Rev. Dr. C. Eric Funston on the Sixth Sunday after Pentecost, July 1, 2018, to the people of St. Paul’s Episcopal Church, Medina, Ohio, where Fr. Funston is rector.

The illustration is Christ Raises the Daughter of Jairus by Russian artist Yelena Cherkasova (b. 1962).