“God’s Abundance: A Snack Food Theology” – Sermon for the 6th Sunday of Easter (May 28, 2000: Memorial Day Weekend), Lectionary Year B 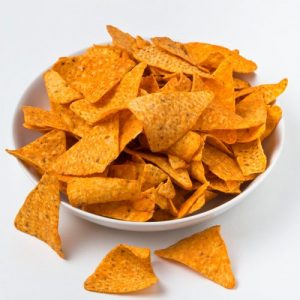 Monday being “Memorial Day,” this weekend, in the traditions of our country, we are remembering and celebrating those who have fought on behalf of, and given their lives for, the United States. In the traditions of the church today, we are celebrating something called “Rogation Sunday,” on which we give thanks for the abundance of the earth and ask God’s blessings upon agricultural pursuits, upon the fields and the herds. I’d like to read you a story about giving thanks for abundance. It is from the Paul Harvey radio program.

It is gratitude that prompted an old man to visit an old broken pier on the eastern seacoast of Florida. Every Friday night, until his death in 1973, he would return, walking slowly and slightly stooped with a large bucket of shrimp. The sea gulls would flock to this old man, and he would feed them from his bucket. Many years before, in October, 1942, Captain Eddie Rickenbacker was on a mission in a B-17 to deliver an important message to General Douglas MacArthur in New Guinea. But there was an unexpected detour which would hurl Captain Eddie into the most harrowing adventure of his life.

Somewhere over the South Pacific the Flying Fortress became lost beyond the reach of radio. Fuel ran dangerously low, so the men ditched their plane in the ocean…

For nearly a month Captain Eddie and his companions would fight the water, and the weather, and the scorching sun. They spent many sleepless nights recoiling as giant sharks rammed their rafts. The largest raft was nine by five. The biggest shark…ten feet long.

But of all their enemies at sea, one proved most formidable: starvation. Eight days out, their rations were long gone or destroyed by the salt water. It would take a miracle to sustain them. And a miracle occurred.

In Captain Eddie’s own words, “Cherry,” that was the B-17 pilot, Captain William Cherry, “read the service that afternoon, and we finished with a prayer for deliverance and a hymn of praise. There was some talk, but it tapered off in the oppressive heat. With my hat pulled down over my eyes to keep out some of the glare, I dozed off.”

Now this is still Captain Rickenbacker talking…”Something landed on my head. I knew that it was a sea gull. I don’t know how I knew, I just knew. Everyone else knew too. No one said a word, but peering out from under my hat brim without moving my head, I could see the expression on their faces. They were staring at that gull. The gull meant food…if I could catch it.”

And the rest, as they say, is history. Captain Eddie caught the gull. Its flesh was eaten. Its intestines were used for bait to catch fish. The survivors were sustained and their hopes renewed because a lone sea gull, uncharacteristically hundreds of miles from land, offered itself as a sacrifice. You know that Captain Eddie made it.

And now you also know…that he never forgot. Because every Friday evening, about sunset…on a lonely stretch along the eastern Florida seacoast…you could see an old man walking…white-haired, bushy-eyebrowed, slightly bent. His bucket filled with shrimp was to feed the gulls…to remember that one which, on a day long past, gave itself without a struggle…like manna in the wilderness.[1]

Feeding the seagulls was Eddie Rickenbacker’s way of giving thanks for God’s abundant blessings that that one gull, back in 1942, represented.

Today we, as we began our service, I read the Collect of the day in which we prayed:

O God, you have prepared for those who love you such good things as surpass our understanding: Pour into our hearts such love towards you, that we, loving you in all things and above all things, may obtain your promises, which exceed all that we can desire…..[2]

Bible scholar and author Walter Brueggemann is one who says that we don’t, although the Christian story is one of abundance. Rather, says Brueggemann, we live a “narrative of scarcity [which] posits that the past is barren of miracles and the only way to get anywhere is to invent yourself and scramble for whatever you can get. A past without gifts and a future without hope,” he continues, “gives a present as an arena for anxiety–an anxiety endlessly stirred by those who generate the great theology of scarcity – a theology which says our neighbors are a threat; which creates more suicides, murders and prisons.”[3] The alternative is the narrative of abundance.

We heard some of that narrative in the lessons today. In our first lesson we have a story of the First Century church in which, when someone named Agabus predicted scarcity, the followers of Jesus responded with a plenitude of gifts. “The disciples determined that according to their ability, each would send relief to the believers living in Judea; this they did, sending it to the elders by Barnabas and Saul.”[4] Those disciples believed, and lived, in the abundance which promised in today’s Psalm: “[T]he loving-kindness of the LORD fills the whole earth.”[5] Our epistle lesson assures us that that abundance is meant for us, as well: “God is love, and those who abide in love abide in God, and God abides in them.”[6]

It is easy to believe in scarcity. Our culture, as Brueggemann said, encourages us to think that way. The philosophy of consumerism encourages what Brueggemann calls a “love affair with commodity that is a spiritually demonic force.” But every once in a while, even the consumerist system contains a glimpse of the true story.

Not too long ago there was a Ruffles potato chip commercial showing two Esquimos sitting in the midst of a vast, uninhabited, frozen waste. One was sublimely scarfing down his bag of Ruffles, while the other drools longingly in his direction. In reply to his request for a chip, the first man declares to his lone companion, “But if I gave one to you I would have to give one to everybody.” Then we heard the Ruffles slogan: “So good you’d better get your own bag!”[7] At the same time, there was a Nacho Cheese Doritos employing comedian Jay Leno as philosopher-spokesperson. After extolling the chips’ great flavor and radical crunch, Leno gave us Doritos eaters free rein: “Crunch all you want … we’ll make more!”[8] The Christian theology of abundance is more Nachos than Ruffles; a Christian snack food theology says, “Crunch all you want … God will provide more!”

Most of you know that I love statistics, so here are a few that underscore how abundant our blessings are. In a recent year, Americans – including church members – spent an average of $164 on soft drinks, $657 on restaurant meals and over $1,000 on recreation activities per person. In 1995, Americans spent $2.5 billion on chewing gum, $4.9 billion on movies, $8 billion on adventure travel, $12 billion on candy, $20 billion on cosmetics, and $49 billion on soft drinks. Now that is abundance! At the same, time in the 1990’s the average American church member spent less than $20 a year on global outreach – including activities to provide temporal and spiritual aid to the 35,000 children who die of starvation around the globe everyday. So, I ask you again … Do we live as if we trusted in God’s abundance?

In today’s Gospel lesson we heard part of what is called Jesus’ “farewell discourse” in the Gospel according to St. John. In it, Jesus says, “I am telling you these things so that you may have complete joy.”[9] The great German theologian Paul Tillich taught that joy is different from pleasure or superficial happiness and is not the opposite of pain. Tillich said that joy, which is deep and abiding, is the result of fulfillment of purpose. When we are loving, when we abide in the loving spirit of our Lord, then we realize the fulfillment of our true purpose. The result is joy. We find joy in fulfillment; we find fulfillment in God’s abundance; and God’s abundance is love.[10] Jesus concluded his farewell discourse with an injunction: “This is my commandment,” he said, “that you love one another as I have loved you. No one has greater love than this, to lay down one’s life for one’s friends.”[11]

This weekend we remember with gratitude those who laid down their lives for their friends because most of them, if not all, believed that God’s abundant blessing of this nation was worth fighting for. The best way we can honor their memories is to celebrate God’s profligate bounty, to abandon the philosophy of scarcity, to live trusting in God’s loving abundance which abides in us and exceeds all that we can desire.

This homily was offered by the Rev. Dr. C. Eric Funston on the Sixth Sunday of Easter, May 28, 2000, to the people of St. Francis of Assisi in the Pines Episcopal Church, Stilwell, Kansas, where Fr. Funston was rector from 1993 to 2003.

The lessons for the service were Acts 11:19-30; Psalm 33; 1 John 4:7-21; St. John 15:9-17. These lessons are from the Prayer Book lectionary and differ from the Revised Common Lectionary (see The Lectionary Page). The homily, however, focuses primarily on the Gospel lesson which is the same in the two lectionaries.