“You Are What You Eat” – Sermon for the Third Sunday of Easter, RCL Year B 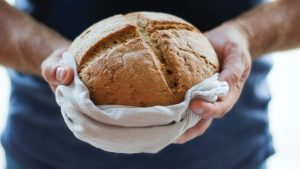 Anthelme Brillat-Savarin , an 18th century French politician once said, “Tell me what kind of food you eat, and I will tell you what you what kind of man are.”[1] The 19th century philosopher Ludwig Feuerbach said, “Man is what he eats.”[2]

These observations have been distilled into our modern idiom. “You are what you eat” is a saying one hears or reads pretty regularly. And it’s true. Eating shapes our identities, defines who we are. A particular food and drink may highlight ethnicity, nationality, or age: tacos, lasagna, Coca Cola (over fifty), Pepsi (under thirty,) hamburgers, sushi. Food and drink defines the great holidays and important celebrations of our lives: champagne on New Year’s Eve, turkey at Thanksgiving, plum pudding at Christmas, hot dogs on the Fourth of July, eggs at Easter.

An ordained colleague of mine once commented that the Sacramental presence of the Eucharist has shifted location in the modern church. Once the table-fellowship of the church was centered on the altar; now, he said, it is found elsewhere depending upon denominational tradition. For Baptists, it is now found in the fried chicken dinner; for Methodists, in the potluck supper; and for Episcopalians, at coffee hour. He was kidding, of course, but there is an element of truth in his humor.

Gathering for a shared meal, of whatever kind, is a fundamental part of the human experience. We must eat together to be human and to become human. We must also, it appears, eat together to know God. President Woodrow Wilson, who was the son of a Presbyterian minister, is often quoted as saying that in the Lord’s Prayer, the first petition is for daily bread. “No one,” he said, “can worship God or love his neighbor on an empty stomach.”[3]

Food plays a very important role in the great story of God and God’s people told in the Scriptures. Eating and drinking can be the occasion for sin, for separation from God and from others. Remember, the misuse of food, the fruit of the tree of the knowledge of good and evil, caused the human fall into sin.[4] A difference over which kind of food was a better offering to God led to the first murder, Cain’s killing of Abel.[5] The Hebrews rebelled against God in the wilderness because of their doubt as to whether God could feed them.[6] Satan’s first temptation of Jesus was to urge him to ease his hunger by turning stones into bread.[7] Judas was revealed as Jesus’ betrayer when he dipped his bread in the dish after Jesus.[8]

On the other hand, many of the wonderful and good parts of God’s story involve food and drink. There was a second tree in that first garden, a tree giving eternal life. Abraham entertained angels unawares, providing food for them and learning that he and Sarah will have a child whose descendants will be a blessing to all humanity. God, in spite of that rebellion in the wilderness, fed the Hebrews with manna and quenched their thirst. Jesus took one boy’s picnic lunch and fed five thousand men, together with their wives and children.[9] The culmination of God’s plan for humanity and, indeed, for the entire creation is described as a great feast which last forever and to which all humanity is invited.[10]

Today we have a Gospel lesson in which food plays an important part: Jesus “showed them his hands and his feet. While in their joy they were disbelieving and still wondering, he said to them, ‘Have you anything here to eat?’ They gave him a piece of broiled fish, and he took it and ate in their presence.” (Some ancient manuscripts say that they also gave him a piece of honeycomb which he took and ate; the Authorized Version includes this reference.) And this is not the only post-Resurrection appearance in which food plays a part. We have already heard the story of Cleopas and his companion, to whom the Lord was revealed in the breaking of the bread.[11] In another post-Resurrection appearance, John records that Jesus cooked a grilled fish breakfast for the disciples on the shore of the Sea of Galilee.[12] The traditional interpretation of these incidents, particularly the one we heard of in today’s Gospel, is that they were meant to demonstrate to the apostles, and are recorded in Scripture to demonstrate to us, that Jesus’ Resurrection was actual and physical, not merely a ghostly appearance.

I’m sure that’s true, but I have always thought that the particular incident we heard today has an additional significance. Jesus, asking this question, “Have you anything here to eat?” sounds like a teenager coming home from a hard day at school, a construction laborer returning from the site, a farmer coming into the kitchen after hard work in the fields. It has always seemed to me that there is a suggestion in this that Resurrection, redemption, salvation is hard work! You and I and the rest of our race are so darned stubborn, we are so obstinate in our sinfulness, that saving us must take a lot of energy!

One supposes that God could have accomplished the work of redemption in anyway God chose, including just waving the divine almighty arm and being done with it. But, as Frederick Buechner noted in his book The Magnificent Defeat, that isn’t God’s way. God does not wish to be up on high, separated from God’s people. In Christ, God has “pitched his tent among us;”[13] God has dwelt with us where we are and as we are. As Buechner put it: “[Jesus] never approached from on high, but always in the midst, in the midst of people, in the midst of real life and the questions that real life asks.”[14] Real life questions like, “Have you got anything to eat?”

I believe that that is a question Jesus continues to ask. Just as he stood in that room and asked it of the first disciples, he stands in this room and asks it of us today. On Monday, we received the master of the Presiding Bishop’s Fund appeal which is copied and inserted in your bulletins about the drought and famine in Ethiopia and Eritreia. As I read through it deciding whether to distribute it today, it occurred to me that in the need of the people of that starving land, Jesus stands in our midst and asks us the same real life question: “Have you got anything to eat?”

And the answer to the question must be, “Yes.” And what we have to offer them is not simply our money, which is what the fund is asking for, but what our money represents –– ourselves, our life and labor. “You are what you eat” said Savarin and Feuerbach, but the idea was not original to them. In the Eucharistic prayers of nearly every Anglican prayer book around the world is some variation of the words penned by Archbishop Thomas Cranmer in 1549:

And here wee offre and present unto thee (O Lorde) oure selfe, oure soules, and bodies, to be a reasonable, holy, and lively sacrifice unto thee: humbly besechyng thee, that whosoever shalbee partakers of thys holy Communion, maye worthely receive the most precious body and bloude of thy sonne Jesus Christe: and bee fulfilled with thy grace and heavenly benediccion, and made one bodye with thy sonne Jesu Christe, that he maye dwell in them, and they in hym.[15]

You are the body of Christ. In you and through you the work of the incarnation must go forward. You are to be taken; you are to be blessed, broken, and distributed; that you may be the means of grace and the vehicles of the eternal charity.[16]

In answer to the question always asked by the Risen Christ present in the suffering of the Poor, “Have you got anything to eat?” we must always respond with sacrificial giving: “Yes. We have ourselves to offer, to be blessed, broken, and distributed.” I encourage you to respond generously to the Presiding Bishop’s appeal on behalf of the starving poor of Ethiopia and Eritreia and, whenever you can, to respond personally, with yourself, to all those in whose need Christ stands and asks, “Have you anything here to eat?”

This homily was offered by the Rev. Dr. C. Eric Funston on the Third Sunday of Easter, May 7, 2000, to the people of St. Francis of Assisi in the Pines Episcopal Church, Stilwell, Kansas, where Fr. Funston was rector from 1993 to 2003.

[3] This quotation is ubiquitous, but I have been unable to find a reference to Wilson’s original utterance.